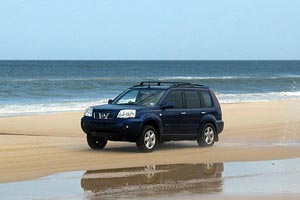 Living just across the bay from the island it’s not hard to know when there’s been another 4WD crash on Fraser Island … the helicopters coming over the house as they head towards the hospital tell the story all too clearly and it was a story they told again yesterday.

Eight Japanese tourists travelling in what, from the press and television footage, appears to be a 5-seater Landcruiser station wagon (not a troopie – the more common tourist transport on Fraser) were the latest victims when the driver “swerved to avoid some undulations in the sand”.

One person died at the scene, two more … including the driver … were flown to Brisbane in a critical condition, four were flown to Hervey Bay hospital in a serious condition and one walked away with minor injuries.

Fraser Island is unforgiving for inexperienced drivers … the beach may look firm but one wrong move and a wheel digs in and the rest of the vehicle continues over the top. Then it can take an hour or more for even the most basic form of qualified help to arrive.

There have been 43 serious accidents on the island in the last six years and only last April two backpackers from Europe died when the vehicle in which they were passengers rolled just a kilometre or two further down the beach.

For a look at what it’s like to drive on Fraser Island have a look at “So You Think Your Roads are Bad?“

Another 4WD Rollover on Fraser Island