It may not reach here till some time after 2012 but Australia is being considered as a market for the all-new plug-in Prius from Toyota.

Approximately 600 units will be introduced in Japan, the United States, and Europe over the first half of 2010, for use by governments and businesses.

In Japan, TMC will lease approximately 230 units to government ministries, local governments selected for the Japanese Ministry of Economy, Trade and Industry’s EV & PHV Towns program, corporations such as electric power companies, and other entities.

In the United States, approximately 150 units will be provided to government agencies, corporations, universities and research agencies for use in a demonstration program aimed at collecting driving data and spurring the development of battery-charging infrastructure.

The Prius Plug-in Hybrid will also be introduced in the United Kingdom and Portugal, with the company also considering 10 other European countries, including Germany and the Netherlands, along with countries in other regions, such as Canada, Australia and New Zealand. 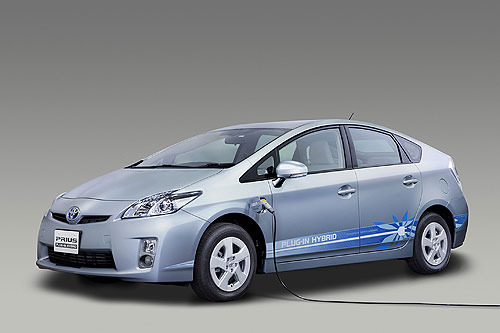 The Prius Plug-in Hybrid can be charged using an external power source such as a household electric outlet, and is the first vehicle produced by TMC to be propelled by a lithium-ion battery.

Further, due to the battery’s expanded capacity, the vehicle has an extended electric-vehicle driving range, enabling use as an electric vehicle (EV) for short distances. For medium and long distances, after battery power depletes to a level no longer allowing EV driving mode, the vehicle functions as a conventional petrol-electric hybrid vehicle (HV). Thus, use is not constrained by remaining battery power or availability of battery-charging infrastructure.

Verifications and rules that gauge the performance of a PHV differ from region to region, but in Japan, the Prius Plug-in Hybrid has a cruising range in EV mode of approximately 23 km with a fully charged battery, and an average PHV fuel efficiency of 57km/L and CO2 emissions* of 41 g/km under specified driving conditions combining driving performance both as an EV and as a HV. (Results are based on the JC08 Japanese test cycle** and verified by the Ministry of Land, Infrastructure, Transport and Tourism of Japan.)

TMC believes that, to meet the diversification of energy sources, plug-in hybrid vehicles are a highly suitable environmentally considerate option. TMC is therefore actively encouraging market introduction and aiding understanding. To promote the soonest widespread use of PHVs, TMC will analyse feedback regarding the Prius Plug-in Hybrid, with an aim to begin sales in the tens of thousands of units to the general public in two years.

TMC promotes the use of energy sources other than petrol, such as electricity, to limit the consumption of fossil fuels and to reduce CO2 emissions. Thus, the company is accelerating the development of electricity-related technologies honed by experience gained from 12 years selling petrol-electric HVs, the market introduction of the “RAV4 EV” SUV and the leasing of fuel-cell HVs.

*Includes only CO2 emissions generated during vehicle operation, not those generated in the production of electricity used to charge the vehicle’s battery.

**Newer Japanese test method than the preceding 10-15 test cycle that better approximates actual driving conditions, meaning that the fuel consumption rates tend to be slightly lower than those measured under the 10-15 test cycle. Fuel-consumption rates and cruising distances are values from specified test conditions. Average fuel consumption and cruising distances will vary markedly depending on such variables as driving conditions and driving methods, particularly, daily driving distance, the battery’s charge level and air-conditioner use.