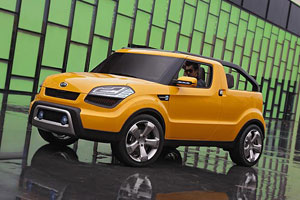 I’ve had this photo sitting on my laptop’s desktop for nearly a year now … that’s how long ago Kia released the Soul’ster concept vehicle. It’s nothing all that special … it’s only a Kia Soul with the back altered to turn it into a very small ute … but lots of people in the United States want to see it released.

Over there the experts all believe that the Kia Soul’ster would be a big seller in what they call the micro truck market but oddly Kia seems a little hesitant to produce it. Right now there is another car maker who is looking very seriously at bringing their own micro truck to the US market so Kia just might miss their big chance.

Here in Australia the Soul’ster might be quite popular in some areas but perhaps not north of Brisbane. On the Fraser Coast the local Kia dealer doesn’t seem to have ever had a Kia Soul in stock so I guess the demand for the Kia Soul’ster is not going to be that great.

It’s the Kia that Lots of People Want but …