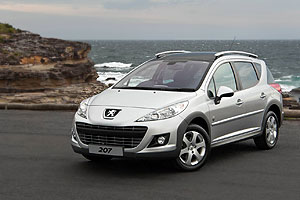 In addition, the wagon’s ride height has been increased by 16mm at the front and 21mm at the rear (thanks to the use of new springs and larger tyres – 205/55.16V) and black wheel arches, bumper and sill extensions give increased protection and give the Outdoor a tough new look.

Despite the slight increase in the centre of gravity the 207 Touring Outdoor still had to retain the important comfort and handling balance painstakingly developed for the original 207 Touring so a 40,000 Nm/rad rear torsion beam (stiffness identical to that of the original) has been fitted, which also performs the role of an anti-roll bar.

The new 16-inch alloy wheels are wider at 6.5 inches, maximising the performance of the new tyre, while the electric power steering’s calibration has been specifically set up for the new tyres.

Combined with the excellent structural performance of the 207 in terms of rigidity (0.9 mrad), the resulting comfort and handling performance ensure both safety and driving pleasure.

The new 207 Touring Outdoor shares the upgraded design elements that are featured throughout the rest of the new 207 range, including a redesigned front end and a more luxurious passenger compartment with an added taste of adventure. 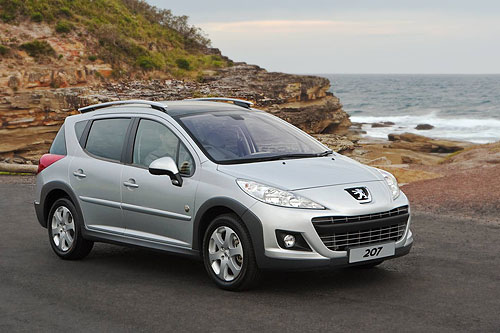 The wagon is available with two engine and gearbox combinations:

Despite these upgrades to the model, prices remain exactly the same, with Recommended Vehicle Pricing of $30,490 for the petrol model and $31,490 for the HDi diesel model.

The new 207 Touring Outdoor is fitted with a unique interior comprising partial leather / sports cloth seats in either black or chocolate brown, while the dash and centre console is adorned with a refined “Grinium chaud” decoration, reminiscent of molten metal.

As on the previous 207 Touring, the arrangement of the rear seats is slightly higher and further back than in the hatchback, offering more space and excellent forward visibility.

The rear seats fold flat extremely easily when additional space is required thanks to invisible connecting rods and parallelograms – simply release the lever located at the top of the seat back with one hand, the seat back (complete with head restraints) then folds against the seat cushion which lowers automatically, creating a perfectly flat surface with five load support rails.

With all seats in place, the load area is 438 litres – when the seats are folded flat to the floor, this area increases to 1,433 litres.

This load area can be accessed in three ways:

* via the tailgate assembly which has a low load sill, protected with a chrome trim, making access particularly easy
* via the rear windscreen on its own by means of a dedicated button on the remote control or a dedicated lever – practical when adding an object to an already loaded boot or when removing a piece of luggage without revealing the full contents of the boot
* when the seats are in place, the load area can be accessed from inside the car, via a flap at the rear of the parcel shelf which folds and is fitted with two handles, one on the boot side, the other on the inside.

Ok so it’s built to look tough but is it really as tough as an old Peugeot 404 wagon? No one marketed them as being an off-road vehicle but our editor took his into places many other cars of the time couldn’t reach.