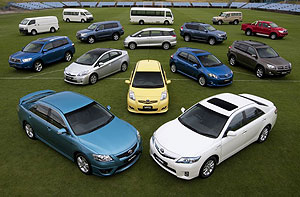 Toyota sold more passenger cars in 2009 than any other company. It is the fourth year in a row Toyota has achieved this feat. Toyota’s 2009 sales of 99,057 passenger cars were more than 18,000 ahead of its nearest rival.

Toyota also sold more SUVs and commercial-vehicle sales than any other company, bringing its 2009 sales total to 200,991 vehicles.

Corolla completed its 10th consecutive year as Australia’s top-selling small car with 39,013 sales. It was Australia’s best-selling car in July, August and October. The hatch range received safety and other upgrades in November.

Camry had its 16th year in a row as Australia’s best-selling medium car, lifting its market share to 36.2 per cent from 34.0 per cent in the previous year (medium cars < $60K). Its sales of 20,846 were more than 12,000 ahead of the nearest rival in its segment. An upgrade launched in July brought improvements, including to fuel economy. From next month, the Australian range will be extended with the launch of the Hybrid Camry – Australia’s first locally built hybrid car.

Prius is Australia’s and the world’s best-selling hybrid car. The mid-year introduction of the third-generation car led to an all-time Australian sales record in July of 446 sales. Prius sales of 3,040 in 2009 lifted its local cumulative total to 14,750. Globally, Prius has topped 1.6 million sales. It is officially recognised as Australia’s greenest car with the highest five-star environmental rating from the Federal Government’s Green Vehicle Guide.

Aurion achieved 13,910 sales and 14.3 per cent of the highly competitive sub-$70K large-car market. A facelift in September brought fresh styling and a five-star safety rating. Last month, Aurion was named Best Large Car by the motoring clubs, particularly for its value, low running costs and build quality. It is the third time Aurion has won this award.

Yaris (and its predecessor) led the light-car segment for six years from 2003-2008. It was runner-up in 2009 by fewer than 200 units, achieving 19,447 sales and a segment share of 17.0 per cent. In September, Toyota added the safety of vehicle stability control and traction control as standard equipment on its 1.5-litre Yaris models.

Tarago maintained its position with 1,907 sales and 18.5 per cent of the people-mover segment.

Toyota Sells More Passenger Cars than Its Competitors in 2009