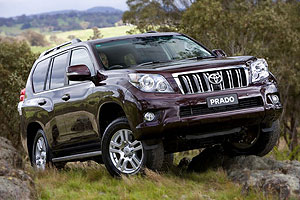 It has led SUV sales for many years, including each year since 2003 when SUVs were first reported as a separate segment in the official sales figures.

Toyota’s SUV market share was 24.7 per cent, representing almost one out of every four SUVs sold in Australia. Three of the top four SUVs were Toyota vehicles – LandCruiser Prado, Kluger and RAV4.

During the year, RAV4 and Prado both passed cumulative Australian sales of 150,000 since their introductions in 1994 (RAV4) and 1996 (Prado) and a highlight of the year was the arrival of the fourth-generation LandCruiser Prado range, which went on sale in November.

Prado was the best-selling medium SUV for the second year in a row with 13,180 sales, just ahead of Kluger with 12,848 sales.

Combined Prado and Kluger sales meant Toyota accounted for 35.9 per cent of all medium SUV deliveries. As a result, Toyota was the leading participant in this sub-segment for the third year in a row.

Among 4WD vehicles, Prado has led the medium SUV market for all but one year since its first full year of sales in 1997.

LandCruiser 200 Series, the perennial favourite among large-SUV customers, retained its title with 7,755 sales and a market share of more than 70 per cent.

In 2009, sales of SUVs did not suffer as much as most other areas of the market in the wake of the global financial crisis. While volume was down 3.4 per cent, this was a smaller drop than the 7.4 per cent decline in the total Australian new vehicle market.

The luxury SUV sub-segment bucked the trend by posting growth of 7.0 per cent. Sales of compact and medium SUVs also out-performed the overall market.