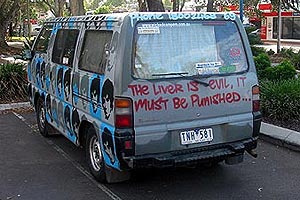 Way back in December 2005 I posted a little story about Wicked Campers and you can see it by following the link. It was a fairly innocent story about seeing them around town but it certainly provoked quite a response from people all over the world and the conversation has gone on and on.

It’s now received 43 comments from one or two (including my own daughter) who have been quite satisified with their Wicked Camper experience, several comments from someone who was obviously a company schill (some of which were deleted because of their tone), one comment from a company representative and a hell of a lot from people who wanted to warn others that Wicked Campers offered very little in the way of service or dependable vehicles.

Today the Wicked Camper saga took another turn as almost the entire Wicked Campervans fleet has been voluntarily taken off Queensland roads following a crackdown on the hire vehicles by the State Government.

Acting Premier Paul Lucas said the backpacker hire company had voluntarily decommissioned 77 of their 86 vehicles when asked to submit their fleet for safety tests.

The company then submitted the remaining nine of their vans for road safety tests and Transport officials were forced to take five of those off the road.

“What this means is that out of a fleet of 86 vehicles only four of them were safe to be on our roads,” said the Acting Premier.

“Quite frankly, that is frightening, and we have written to other State Governments to alert them to the problem.

“I am relieved that we have been able to investigate and act here in Queensland before a terrible tragedy occurred.

“We have seen the incidents involving 4WDs on Fraser Island and the Government has taken measures there to try and protect visitors to our State.

“Young adults come here to enjoy themselves from all over the world and they are essential to our Tourism industry.”

Mr Lucas said that backpackers make up nearly 20% of the state’s international visitors, with the latest figures showing that more than 360,000 coming to Queensland last year from January through to September 2009.

They are unique in the type of travel they enjoy – they spend more (an average of $6171 each in Australia), stay longer and travel widely throughout the state.

“Backpackers are a vital part of local regional economies, as both visitors who like to get “off the beaten track” and as short-stay workers,” he said.

“They contribute to the life of our State and our economy and they need to be treated with respect. They need to know that they can come here and enjoy Queensland safely.”

The decommissioning of the Wicked Camper vans fleet comes after a December operation by Transport and Main Roads vehicle inspectors to ensure the hire vans were safe to drive.

The December inspections followed on from a crackdown in North Queensland in October that saw 35 vehicles de-registered before they could be inspected.

This investigation took place as a result of random compliance checks at the business premises of Wicked Camper Vans in August and October in Cairns.

Transport Minister Rachel Nolan said the experience in Cairns alerted inspectors to investigate the company on a State-wide basis.

“Officer had ordered 51 vehicles to be inspected last month, however 42 were withdrawn from hire and de-registered by Wicked Camper Vans before they could be given a thorough mechanical going over,” she said.

“We also ordered a number of Wicked Campervans to be repaired as a result of the crackdown.

“I know there’s been concern in the past about some of the slogans Wicked painted on their campervans.

“But the slogans they paint on the vans aren’t my top priority. It’s what’s under the bonnet that counts and in many cases these vehicles simply weren’t up to scratch.”

“It is important to note that these vehicles were the ones the company considered worthy of submitting for a roadworthy. They voluntarily took the vast majority of the fleet off the road,” said the Transport Minister.

Ms Nolan said the Department of Transport and Main Roads would keep a special watch on the vehicles that had been de-registered before inspections.

“This will include investigating any safety certificates that are issued for Wicked Campervans to be re-registered,” she said.

The Minister said the Department had written to other states and territories suggesting there may be similar mechanical problems with Wicked Campervans across the country because they had a moral duty to do so.

“There’s nothing to stop drivers who have hired a van interstate from bringing it into Queensland so we need to do everything we can to make sure these issues are being tackled nationwide.”

Wicked Campers – a Story that Just Won’t Go Away