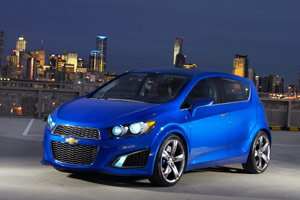 Chevrolet has announced the world debut of the Aveo RS show car at the 2010 North American International Auto Show and it’s interesting to see because the Aveo RS is definitely more European than North American and Chevrolet suggest that it hints at the next-generation Aveo.

Longer, wider and more spacious than the current production Aveo, the Aveo RS showcases the what Chevrolet suggest as the car’s upscale-looking design cues both inside and out, and presents the many personalization options potentially available on the next-generation car.

“We hope the Aveo RS show car will demonstrate that we are as serious about redefining the Aveo and its place in the small-car segment as we were about reinventing the Malibu,” said Jim Campbell, Chevrolet general manager. 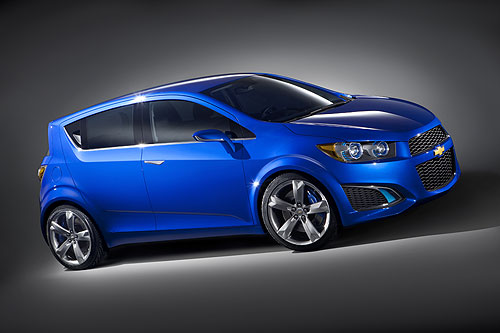 Bodywork
The Aveo RS show car, finished in electric Boracay Blue, wears global Chevrolet design cues such as the dual element grille, round taillamps and fender flares, but there are also low openings and a lower mouth trimmed in a combination of brushed and polished aluminum.

Outboard fog lamps are integrated into an exaggerated brake-cooling inlet that flows into the front fender flares, creating an aggressive-looking face.

Exposed headlamps, with their brushed aluminum structural surround, are inspired by the designers’ affection for motorcycles. 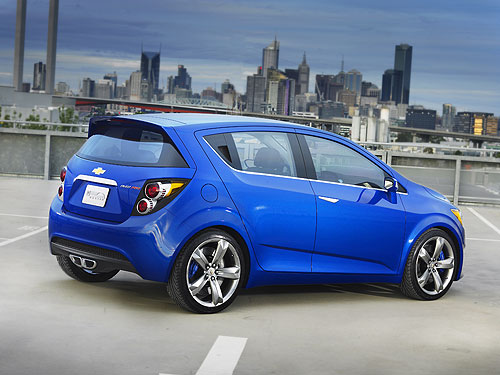 The sleek side profile is characterized by uninterrupted body side lines, a high beltline and low roofline. The side mirrors with amber-colored turn signal indicators carry the same shape as the car and seemingly disappear into the profile.

At first glance, the car actually looks like a three-door hatch because the rear door handles are discreetly located in the “C”-pillar area.

“The Aveo RS show car demonstrates how progressive design can inject personality into a small car,” said Michael Simcoe, executive director, North American Exterior Design. “We want customers to see it and have an emotional reaction to it.” 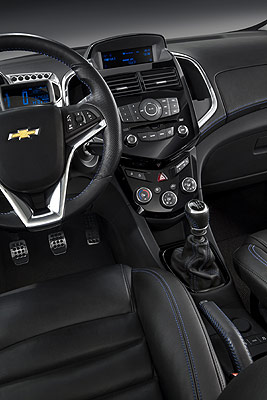 The rear of the show car continues the sport theme, with an integrated spoiler that flows from the roof, a center-mounted exhaust and chrome exhaust tips. The exposed motorcycle-inspired rear tail-lamps feature tinted aluminum housings and a discreet Bowtie logo.

Interior
With its matte black interior highlighted by gloss black, metallic and blue accents, the Aveo RS show car reflects as much attention to detail as the exterior. 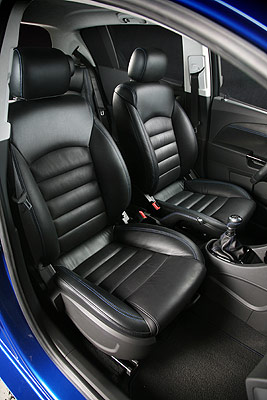 The motorcycle inspiration also carries inside, with a round, analog tachometer set within an asymmetrical LCD readout also trimmed in milled metal with round cutouts; and round, aluminum-trimmed side vents.

The interior is as functional as it is stylish, with storage compartments in the center stack and doors. The rear seats fold
flat for carrying larger items.

Performance
The Aveo RS show car is powered by the same efficient 138-horsepower (103 kW) 1.4L I-4 Ecotec turbocharged engine that
will be available in the upcoming Chevrolet Cruze.

A six-speed manual transmission is included to ensure the car will provide a spirited driving experience. Actual performance figures are yet to be announced.