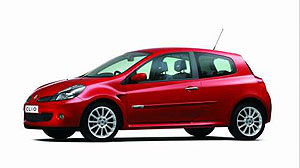 Renault describe the Clio RS 197 as “the F1 inspired hot hatch” and if you look at the specifications there’s no doubt that this three-door hatch really can move along. So if you’re in the market for something that really is all show and all go then this could be for you … but …

Sadly there are always ‘buts’ and for many drivers there are two ‘buts’ about the Renault Clio RS 197 that are hard to overcome.

The first ‘but’ is that this is what some people might consider to be a very ‘serious’ hatch so it doesn’t come with an automatic gearbox … but then if you’re seriously considering a hot hatch from Europe you probably already have a licence that allows you to drive vehicles fitted with manual gearboxes.

The second ‘but’ is the price. Although this is only a three-door hatch we’re not talking cheap Korean here so don’t be surprised when I tell you that the on-road price for this car is going to be well over $40,000 … just the list price is $37,990.

So if the lack of an automatic transmission doesn’t bother you and the price hasn’t taken your breath away let’s look at what you get in a Renault Clio RS 197.

The engine
What turns this three-door hatch into a fire-breathing monster is a multi-point fuel injected 2.0-litre petrol engine that produces 145kW of power at 7,250rpm and 215Nm of torque at 5,550 rpm.

The Euro 4 engine requires premium unleaded fuel and it consumes 11.6L/100km around the city and 6.5L/100km on the open road. The CO2 emissions are really quite high at 199 grams of CO2 per kilometre. 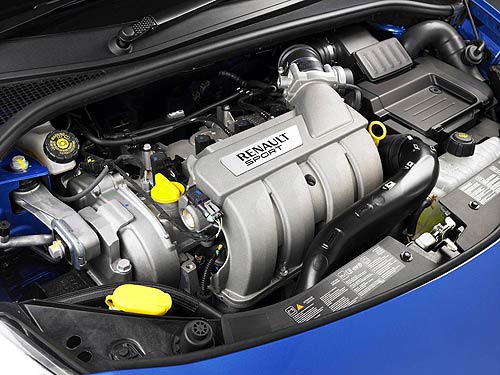 But if you want a three-door hatch that will do 0 to 100km/h in 6.9 seconds and reach a top speed of 223km/h then I guess emission levels are not going to be much of a concern.

Later in the year we might see a new engine with even better fuel consumption and emission figures for Renault have just announced a new Clio model in Europe that comes fitted with the Renault eco2 engine that complies with the latest European emission laws.

Steering and Suspension
Steering in the Renault Clio RS 197 is a variable electric power assist system with just 2.83 turns lock-to-lock and all that gives you a turning circle of 11 metres kerb-to-kerb.

Suspension is a double-axis strut system on the front and torsion beam with programmed deflection coil springs on the rear.

Brakes
The front brakes are Brembo 4-piston calipers and ventilated discs while the rears are solid discs. ABS with electronic brake distribution is also fitted. 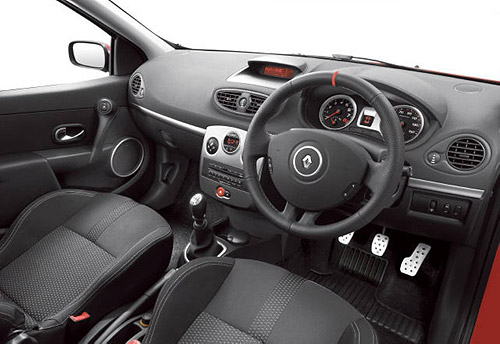 The headlights are double optic and height adjustable and they’re fitted with wipers and a “see me home” function.

Most people who buy a three-door hatch … especially one like the Renault Clio RS 197 aren’t going to be worried by a lack of luggage space and that’s good because there’s only 228 litres of space when the rear seats are in the upright position and 1,038 when they’re folded down.

Of course if you drive a Renault you tend to be something of an individual and Renault understands that … that’s why they offer a huge range of accessories that include everything from carpet mats to a coat hanger that gives you “crease free clothing storage”.

In between those two extremes there’s a front splitter kit, a mirror finisher kit, a rear spoiler, side skirts, roof bars, a steering wheel insert that features the Renault logo, an interior personalisation kit … and that’s only some of the option list.

So there you have the Renault Clio RS 197 … a genuinely hot three-door hatch that’s definitely not going to be for everyone.