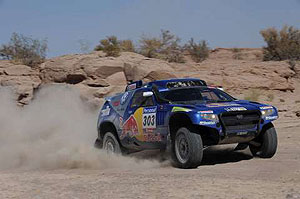 For the second year in a row VW has won the Dakar Rally with in emphatic style. Three VW Touregs finished in the top three positions with just 2 minutes and 12 seconds separating the first and second car.

VW sees the race win as a clear indication that the efficiency and reliability of the Toureg’s diesel engine is second to none.