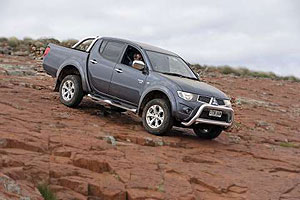 Sometimes you just have to wonder about these awards and what they used to measure how the Mitsubishi Triton managed to win this award. It’s undoubtedly a fine vehicle but can a ute really be compared to something like a Prado or a Land Rover wagon … and even when you do compare it to other like vehicles is it really superior in every way?

Triton four-wheel drive GLX-R utility has claimed Overlander Magazine’s four-wheel drive of the year award for 2009 – the first utility ever to take out the title. The award marks back-to-back wins for Mitsubishi, with the company’s legendary four-wheel drive Pajero wagon claiming the award the previous year.

During testing for the award, a crew of highly qualified and experienced four-wheel drive judges pitted Mitsubishi’s victorious Triton off-roader against a selection of the best new and upgraded four-wheel drives of 2009, including the all-new Toyota Prado and Land Rover’s Discovery 4 wagon.

Trent Nikolic, editor of Overlander Magazine, said that the Triton’s revolutionary win was the result of a unanimous decision by the judges.

“The Triton’s triumph marks the first time a utility vehicle has taken out Overlander’s ultimate gong, and it’s just reward for a ground-breaking dual cab.

Robert McEniry, Mitsubishi’s Australian president and CEO couldn’t be happier with the award. “We’re delighted our Triton utility has claimed the respected Overlander 4WDOTY award, particularly as it has triumphed over more conventional – and much more expensive – four-wheel drive wagons.

“And the fact that we have secured back-to-back wins for the Pajero and Triton in 2008 and 2009 cements Mitsubishi’s reputation as a four-wheel drive powerhouse,” McEniry said.