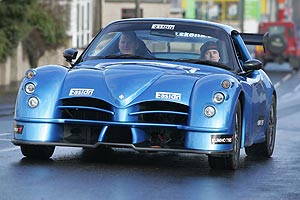 The Skelta G-Force – the car from Toowoomba – is certainly turning heads in Europe and now it’s even made it to Ireland.

The blue Skelta G-Force displayed at Autosport International is shortly to be set up as a circuit racer for Matt Cummings of Stratton Motor Company. However, last week (January 29) the opportunity was seized to whip it over to Ireland and assess its potential for tarmac rallying in that country.

And, who better to make that judgement than five times Irish Tarmac Rally Champion Eugene Donnelly and his highly-renowned engineering partner of 20 years, Derek McGeehan?

Said Donnelly, “The test was unavoidably subjective as the car was not fully set up for our type of stages and the weather was very poor. However, I must say the Skelta impressed me and I feel it could readily be made competitive.

“Its supercharged Honda engine is incredibly responsive and the car is very well balanced. The combination makes for a very agile machine. I see no reason why converting it to full rally specification should in any way blunt its obvious abilities. The car is quick by any standards and I much enjoyed driving it, and would be delighted to see a version developed to compete over here – I think it could do very well.” 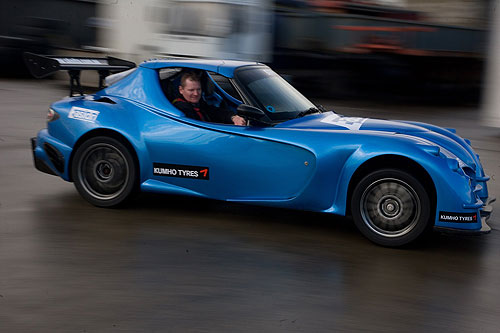 Skelta’s founder Ray Vandersee commented, “I designed and built the car to win Targa Tasmania, so it is used to faster, smoother tarmac roads than they have in Ireland. However, I was extremely encouraged by the feedback we received from Eugene and Derek and very grateful for their valued input.

“We have a lot on our plate at the moment, as both the G-Force and the open-topped Spyder created a lot of interest at Autosport International. We are also busy finalising our 2010 racing plans. However, the car was born to rally and if the opportunity arises to get one into tarmac rallying in Ireland, or anywhere else in Europe, we’d certainly be very interested.”

The Skelta G-Force in Ireland