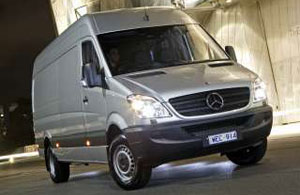 From its international release in 1995 the Sprinter set out to produce a multi-purpose vehicle that gave buyers plenty of options to tailor a commercial vehicle that met their particular needs. Not only did a buyer get an outward appearance that still looks fairly modern today but they also go semi-forward control, high-traction rear-wheel drive, spacious cab, an extensive engine range rounded off by a direct-injection diesel unit that was as powerful as it was economical.

It was available as a panel van, crewbus, chassis, pickup, and with a crewcab, all of these versions in three wheelbase lengths, and the closed-body variants additionally with two roof heights.

The Sprinter targeted mainly the 3.5 tonne GVW class, this tonnage marking an important dividing line in a great many European countries as far as driving licences and traffic regulations were concerned.

The Sprinter lined up with three different engines but interest focused mainly on the OM 602 DELA, a direct-injection turbodiesel with 2.9 litres displacement and five cylinders. With its output of 90 kW and peak torque of 280 Newton metres it took performance to new record levels for vans of this type.

Distributor pump, electronic control and exhaust gas recirculation are also characteristics of this engine. It was complemented by a tried and tested, smooth-running pre-chamber diesel engine developing 58 kW from 2.3 litres displacement and by a zippy four-cylinder petrol unit (likewise with a displacement of 2.3 litres) delivering 105kW of power.

A newly developed five-speed manual transmission transferred the power to the rear axle.

For each version there were at least two different final drive ratios to choose from. As alternative to the manual box, a fully automatic four-speed torque converter transmission followed a short time later.

The new Mercedes-Benz Van was good for a road speed of up to 160 km/h and not only lived up to its name, but quickly put tyre manufacturers on the spot, since few tyres at the time boasted the proper speed index.

The anti-lock brake system (ABS) and an automatic brake differential were standard equipment in many countries and then there was the driver airbag, also a standard feature in Germany and many other countries.

With that said, the Mercedes-Benz Sprinter set new standards for safety in its category, as it did in many other areas.

Along with investing intensive effort in the advancement of conventional drive technology, the engineers also developed alternative drive systems to the production stage in combination with the Sprinter.

One year after the launch of the new van it was already available as the electrically powered 308 E Sprinter. The water-cooled asynchronous motor put out 40 kW and got its energy from maintenance-free lead-gel batteries.

Today the Mercedes Benz Sprinter is till going strong and in more variants than what the original designers may have imagined. We still have the Sprinter vans, crew buses and pickups and we also have commuter buses built on the Sprinter chassis and vans converted into motorhomes.