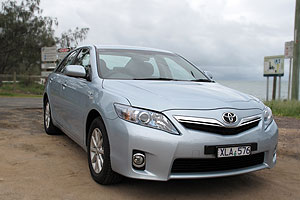 What I liked:
Very cheap on fuel … it’s bigger and more powerful than my own car but uses half the amount of petrol.

Easy to drive … it’s high-tech but you wouldn’t know it when you’re behind the wheel.

Automatic wipers … it’s the first car I’ve tested or driven that has them and I love them.

What I didn’t like:
The controls for the cruise control … the stalk is well below normal eye-level and it’s on the steering wheel yoke and not on the steering column so it moves as you turn the wheel and I didn’t want to take my eyes off the road to find it and set it.

The Australian Toyota Hybrid Camry was released in February and for the last six days we’ve been road testing the standard Luxury model. It’s been very interesting to road test the Hybrid Camry because this is basically a very high tech car that Toyota has had to make as simple as possible for the driver … and they have certainly achieved that.

Everything happens behind the scenes so that all the driver sees is what they would see and experience if they were driving a normal petrol-powered vehicle. So if the thought of driving a vehicle that mixes and matches electric and petrol propulsion, turns itself off when you stop at traffic lights and starts the instant you’re ready to move scares you then don’t be worried … you won’t see any of it and after a day or two you won’t even think about it!

What Toyota says you will see though is a lot more money in your wallet or purse because Toyota claims it will cut your fuel bills by around third and if our experience in testing the vehicle is anything to go on there will definitely be savings.

So with all the high-tech equipment is it hard to get used to?
Well it’s a little disconcerting to pull up at a set of traffic lights and feel the motor switch off but it really does start again the moment you touch the accelerator. And it is really very quiet inside the cabin. You can be cruising at 110km/h and all you can hear is the road-noise from the tyres.

There’s also the fact that the Toyota Hybrid Camry has no gearbox and that can take a little getting used to. I know Stuart had problems when we were climbing through the Blackall Ranges on one of the trips we did in it. It’s not that he was losing traction or acceleration … it was just that, with no gear changes the steady engine noise wasn’t what he was used to as he accelerated up the hills

Apart from that it’s just like driving any normal petrol powered vehicle. You put your foot on the accelerator and it goes … quickly … so you need to watch your speed. It’s the most powerful Camry there is and it really does want to use that power.

Safety and Comfort
There are plenty of safety features for your family. There are front and side airbags to keep your family safe in a crash along with pre-tensioners for the front seat belts. There are plenty of warning lights and alarms to warn you if things are about to go wrong or a door isn’t closed completely and there’s a reversing camera and rear parking sensors too.

The front seats are very comfortable and there’s plenty of lumbar support if you suffer from a bad back. The legroom for front seat passengers is outstanding and rear seat passengers get plenty of legroom too. There’s also plenty of room to strap children into the car seats in the rear of the car.

Front seat passengers enjoy dual-zone air conditioning that works very well. Once again our test period was during some very hot and humid weather and it was a pleasure to be inside the car where it was a steady 22C on my side and 24C on his side.

The Toyota Hybrid Camry has a Smart Entry and Smart Start system that means as long as you have the key in your pocket or handbag you will be able to unlock the doors and start the vehicle without taking the key out of wherever it’s hiding. I’ll talk about starting the vehicle a little later but right now let me tell you that the key includes a personal alarm button that I’m just not game enough to press. I’m sure it’s loud but I don’t want to press it to find out..

It’s impossible to lock the key in the car and the car will tell you if you’ve left the motor running and you’re trying to walk away from the car.

Personally I think that automatic wipers are far more useful than automatic headlights. If you can’t remember to turn your lights on at the appropriate time when you’re driving then maybe you shouldn’t have a license.

Ride and Handling
It’s not a sports car and it’s certainly not an SUV but the ride in the car we tested was outstanding. The suspension was firm but not so firm that you would feel every pothole and bump in the road … just as well considering the state of the main highway that we have to travel over.

Cornering was exceptional and whizzing through some tight … almost hairpin … bends on the Blackall Ranges was amazing. There was no body roll and no tyre squeal … just some very surprised motorists as the Hybrid Camry passed them with ease.

The steering is light and the first time I drove it I was still wearing a sling after some shoulder surgery. There’s also a very convenient armrest on the driver’s door that certainly worked for my sore shoulder.

Fuel Consumption
On the motorway north of Brisbane we cruised at 110km/h while the onboard computer reported a fuel consumption of just 5.7L/100km. Through the Blackall Ranges and on the highway where the speed limit varied from 90km/h to 100km/h we were seeing 6.1 and 6.3L/100km

Toyota says that the car will return a combined city and highway consumption rate of 6.0L/100km but I’m not sure we saw that over the week we drove the Hybrid Camry. However the the car had less than 1000km on the clock when we picked it up and fuel consumption did seem to get better towards the end of the week.

Luggage Space
The available boot space in the Hybrid Camry is less than what you get with the conventional Camry models because the battery takes up some of the room right across the vehicle. The rear seat does fold down … on both sides … but only long articles can only be slipped into the boot and through into the rear passenger space on the driver’s side.

Folding down the rear seats is very easy and it takes little effort to put them back into place.

There’s certainly enough space in the boot for your grocery shopping and then some.

Servicing Costs
Servicing costs are one of the nasty little things that can creep up and bite you when you least expect it and you may think that the servicing costs for the Hybrid Camry will be very expensive. However Toyota have announced that Hybrid Camry Owners will pay a set rate for up to four standard scheduled services during the first three years or 60,000km.

That set rate is just $130.00 does not include the costs for fluids and oils that may be required.

The battery is also an obviously expensive piece of the car but Toyota wants you to feel comfortable about the battery too. That’s why the HV (Hybrid) Battery Warranty coverage on the Hybrid Camry is eight years or 160,000km … whichever comes first.

Starting the Hybrid Camry
The Hybrid Camry is powered by what Toyota calls a Hybrid Synergy Drive and that takes a little time to activate … even if the car has only been turned off for a few minutes.

So what you do when you start the Hybrid Camry is put your foot on the brake and leave it there. You also press the start button and then you wait … you don’t wait for a long time but you do wait longer than you would if you had a conventional vehicle.

As the Synergy Drive becomes active the gauges, the radio and the air conditioning come on line and a few seconds later there’s a slight rumble and you know the motor is running. It’s different and if you’re planning on a fast getaway then it’s not going to happen but you become accustomed to it.

***UPDATE We have since been advised by a reader that the Hybrid Camry is ready to move on battery power as soon as the “Ready” light comes on.

The Bottom Line
The Luxury model without any options … the one we tested … is currently available for $39,990 plus dealer delivery and on-road costs while the entry level Hybrid Camry is $36,990. Even Toyota agrees that price is quite a step up from the petrol Camry models but there are three things to consider here.

Add those together and I think that the Hybrid Camry certainly does represent value for money for a family who want the convenience of a big car or for a business that might lease for a set period before replacing it for the obvious tax advantages.

Would I buy one? Well it certainly fits our lifestyle and it’s comfortable and cheap on fuel so it would have to be on our list if we were thinking about going back to a sedan.