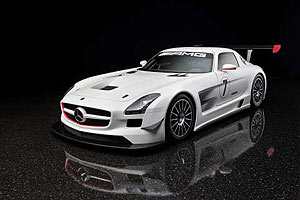 Mercedes-Benz SLS AMG GT3 … it’s a thing of beauty and if you’re serious about racing then this is the machine that could really take you to the top.

The SLS AMG GT3 is definitely not a street car. It’s been developed to comply with the FIA’s GT3 specifications and the target market for this racing sports car are those who like to spend lots of money competing in sprints and long distance races and it’s designed to cope with the stresses that racing imposes on a car.

Larger air intakes at the front and the two intakes below the headlamps supply the engine oil cooler and brake discs with plenty of air to keep their temperatures under control. Engine heat is vented into the front wheel arches as well as through an opening in the centre of the bonnet. 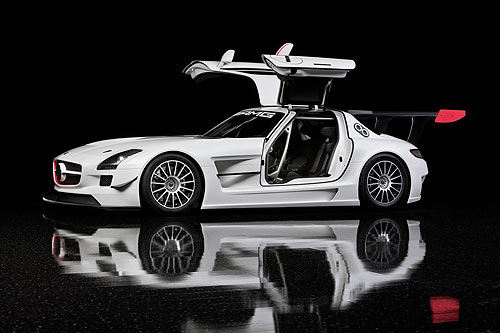 Engine
FIA rules require the AMG GT3 6.3-litre V8 engine to be almost identical to the engine in the street version of the Mercedes-Benz SLS AMG but the lower body weight of the AMG GT3 means that acceleration is improved and this car will do 0 to 100km/h in 3.8 seconds and it has a top speed of up to 300km/h depending on which final drive ratio is fitted to the car.

Thanks to a dry sump lubrication system and an externally mounted oil tank the V8 in the AMG GT3 can sit lower in the body of the car than in the street version of the SLS AMG. 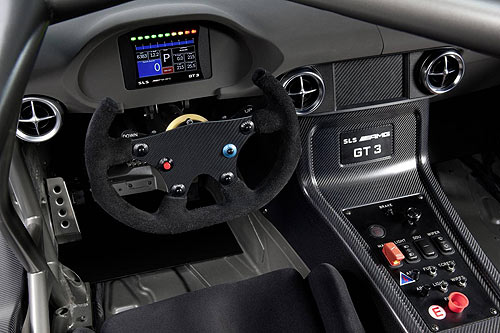 The transmission fitted to the GT3 version of the SLS AMG is a six-speed racing transmission with sequential gear changes. You will notice that there’s no gear stick in the GT3 and all gear changes are made using two shift paddles mounted on the steering wheel.

AMG were unable to fit their high-performance ceramic composite braking system to the GT3 because it is not compatible with the 18-inch wheels required by the FAI regulations. However a specially configured anti-lock braking system is fitted as standard equipment. 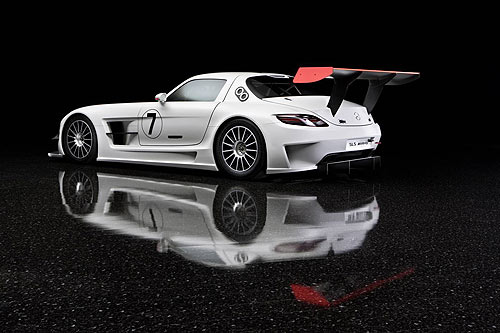 Like any good racing car the AMG GT3 is fitted with an integrated pneumatic jacking system and four jacks will lift the GT3 around 190 millimetres clear of the ground.

A steel rollover cage is fitted as standard as is a six-point seat belt and a HANS (Head and Neck Support) system.

Orders for the Mercedes-Benz SLS AMG GT3 will start being taken during the third quarter of this year and first deliveries will be made early in 2011. Mercedes-Benz has not yet announced the price for this hot looking machine.