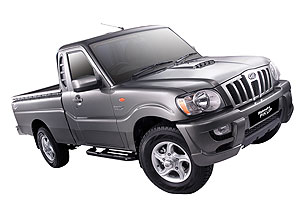 OK, let’s be frank here … this is a major “I told you so” moment here at AussieMotoring,com. For a couple of months now I’ve been telling our illustrious editor that we needed to start reviewing some utes because women drive utes but would he listen to me?

Of course not … he just didn’t believe that women do drive utes but perhaps now he just might wake up to reality.

In a recent survey conducted by Mahindra Automotive Australia (MAA), distributors of the Mahindra Pik-Up ute, an astounding 78.5% thought that perceptions of women driving utes had completely changed with only 21.5% still viewing the ute as a “man’s car”.

37.3% stated it was a non-issue as vehicles are not gender specific, 27.1% said that the ute was a great all-purpose vehicle that can suit women too, and 14.1% said that work-roles were no longer gender related and that many women work in traditionally “male-oriented” jobs, so it was perfectly acceptable for them to drive a suitable vehicle.

Claire Tynan, CEO, Mahindra Automotive Australia says, “Our research showed that people generally view the ute as an all-purpose family vehicle rather than just a workhorse, so have no qualms in seeing women drive vehicles with grunt.”

In fact, some took their opinions further with 21.9% of respondents saying that women driving utes looked quite independent and sexy. 7.6% figured that the woman could be a tradie, and only a tiny 3.1% thought negatively, saying they didn’t think it was “becoming”.

When asked what women thought of having a ute as a family car, 42.8% said they would happily consider it, and 19.9% said they had one already, drove it all the time and loved it.

Ms. Tynan continues, “What’s interesting is that at the dealer level we’re seeing more and more women coming in to look at the vehicle as part of their purchasing process. And we have many female Pik-Up drivers who do a range of jobs, anything from farming to bird breeding, where space and durability is the key.

“Many of our male buyers also see their purchase very much as a joint decision, taking into account what their partners will appreciate. They love that the vehicle will get the job done, but know that their other half will be pleased with all the standard creature comforts such as air conditioning, power steering and windows, adjustable steering wheel for varying heights, a stereo system with an MP3 player, follow-me-home lights, ride-height, and a bright colour pallet to choose from including ‘Apple Red’ which is likely to appeal to the female driver in the family.”

So will we be seeing some ute road tests here on AussieMotoring.com? Sadly our road testing time is all filled up for the next month but after that …