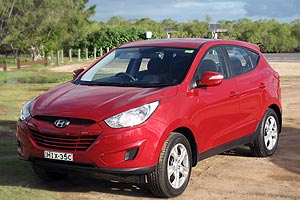 OK, so this week we’re testing the Hyundai ix35 and due to some unusual circumstances I got to drive it all the way back to our office so I get to write about our first impressions.

I know that driving it back to our office doesn’t sound like such a big deal but our office is four hours out of Brisbane so by the time I was pulling into the parking lot I had a pretty good feel for the car.

The model we’re testing this week is the Hyundai ix35 Active … that’s the bottom of the range 2.0-litre two-wheel drive version and the vehicle we’re driving is fitted with the six-speed automatic gearbox.

Before I got behind the wheel I did wonder just how good a six-speed box would be with a 2.0-litre four-cylinder engine but it turned out to be a very good combination There was no hint of the car struggling to find the right gear for the road conditions … something that was once quite common with vehicles fitted with relatively small engines and lots of gears in an automatic box.

Instead of hunting for the right gear the ix35 cruised effortlessly at highway speed and when I needed something extra to overtake a slower vehicle … one that liked to speed up when no one was coming the other way and slow to a crawl when there was … the engine/gearbox was responsive and there was power to spare.

The fuel consumption figures for the trip home was around 8.0L/100km … not quite as good as I expected but then the car still had less than 4,000km on the clock.

The ride is firm and, because of the short wheelbase, that can be just a little uncomfortable when the road surface is a bit rough but the seats are very comfortable and there’s plenty of support for the driver. In fact I think that some Australian car designers could learn a valuable lesson from the places where the Hyundai’s seats do offer support because it’s certainly lacking in the Falcon wagon I often drive when I’m here at the office.

It was quite a hot day on Thursday … the day we brought it back from Brisbane … but the air conditioning had no trouble coping with the temperature and being inside the ix35 was a nice place to be on such a hot day.

The dashboard and controls are well set out and the Hyundai ix35 is a vehicle you can get into and drive with confidence without the need to spend hours pouring over the owner’s manual. I certainly felt at home in it as soon as I got into it.

For me though there is one feature of the ix35 that makes me feel very uncomfortable and did from the moment I hit 15km/h. At that speed all the doors lock … and they remain locked until you stop the car and put the gear selector into Park.

Perhaps that sounds like a really great security measure but think about it a little more and you’ll see that there are some dangerous issues about being inside a car with the doors locked and perhaps not being in a position to unlock them… and there’s also some convenience issues here too. 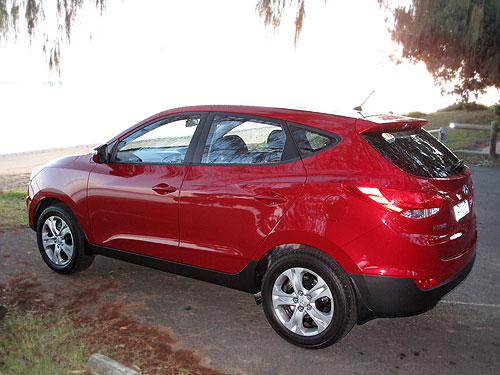 It seems that if you’re incapacitated and your inside the car with the doors locked rescuers will have to smash their way in to get you out. From a convenience point of view there’s going to be no quick pick-up from the footpath anymore and those issues do bother me.

Apart from that all my thoughts about the Hyundai ix35 Active are very positive at this point.