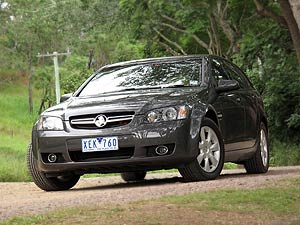 With almost monotonous regularity the Holden Commodore outsells every other car in Australia. During March 11,795 Commodores were sold to people across Australia and until last week I did wonder why.

Why is the Holden Commodore so popular? Well after spending a week behind the wheel of a Berlina Sportwagon I now begin to see why people continue to buy the Commodore.

It may not be as technologically advanced as some other vehicles out there … it may not have fantastic fuel economy around town … and it may have the ability to annoy the crap out of some people with it’s buzzers, bells and other warning signals but it feels like a vehicle should. You feel safe in it, it handles well on the tar and even if you’ll never take it off the black stuff you’re sure it will handle well in the dirt too. And you know that if something goes wrong out in the sticks there’s a mechanic in the next town who can fix it.

And I’m sure that’s why people buy the Holden Commodore … they’re buying reliability that’s both an image and a reality and it works for them. 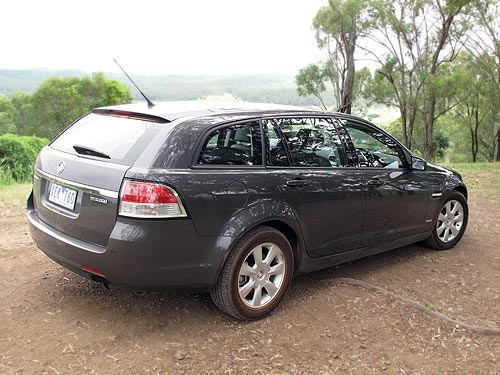 Does that mean that I would buy a Holden Commodore? Probably not but at least now I understand why others do.

It also looks sleek and sporty with those flares over 17 inch alloy wheels that make you think of muscle and the dual exhausts that encourages you to think of blowing everyone else off at the lights. It sits low to the ground too and that adds to the image of power and speed. 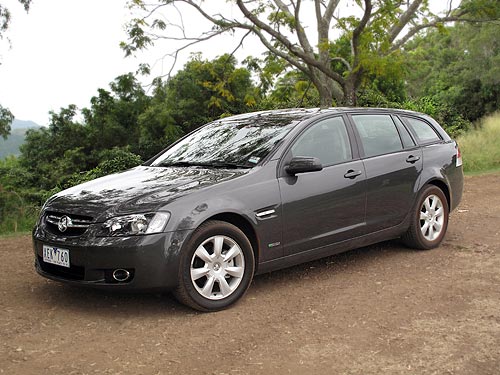 Engine
There’s no doubt that you can wring a lot of power out of the 3.0-litre, six-cylinder SIDI engine that sits under the bonnet of the Berlina Sportwagon. The Holden website won’t tell you how long it will take you to hit 100km/h from a standing start … but it’s definitely not long and this is a vehicle that could get you into a lot of trouble every time you pass a hidden speed camera.

A six-speed auto gearbox is the only transmission offered with the Berlina Sportwagon and most people will find that it’s smooth and predictable. Our other tester had no problems with the gearbox but there were times when I seemed to be able to catch it in the wrong gear and I definitely did not like the cruise control on the test vehicle.

It seemed slow to react to changes in gradients and at the bottom of a hill it would drop 10km/h in speed before suddenly speeding up and wanting to race up the hill … much to the annoyance of people who had moved to the outside lane to overtake. To be fair the problem I was having may have just been unique to the vehicle I was driving and perhaps it could have been adjusted at the next service.

Fuel consumption
The Holden website suggests that the SIDI engine will return fuel consumption on combined cycle of 9.6L/100km but no mention is made of what you might expect in city or country driving. That doesn’t surprise me because around town this vehicle … like all vehicle … will use more fuel than it will on the open road and it will be especially noticeable if you do a lot of short trips.

Despite using more fuel in town and city driving I do think that the figure that Holden quotes for the combined cycle may be a little conservative. When we returned the vehicle at the end of the test the onboard computer was suggesting that we had achieved 8.2L/100km on the return trip and that included highway running as well as the usual stop/start driving through Brisbane.

Ride and Handling
The suspension on the Holden Berlina Sportwagon is firm and there’s definitely no wallowing on rough roads. The steering is light and direct and the Sportwagon doesn’t bounce around as you might expect from a station wagon.

In another life I spent a lot of time in Commodores and Falcons on rough dirt roads so I was interested to take the Berlina Sportwagon off the tar and onto some forestry roads just to see if the Commodore had lost its dirt-road capabilites.

I certainly wasn’t disappointed with the handling of the Berlina in the dirt. It was sure-footed and there were no heart-stopping moments when I began to wonder how I was going to explain to Holden why their press car was neatly folded around a tree.

That trip off the tar also revealed another good point for the Berlina Sportwagon … it’s well sealed. By the time we got back on the tar the wagon was covered in a coating of fine red dust … so thick you couldn’t see out the back window … but there was no dust inside the vehicle at all! 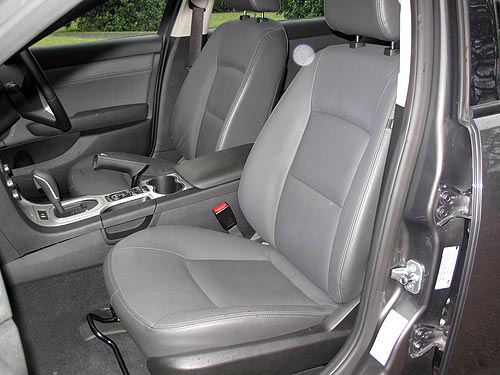 Comfort and safety
The Sportwagon comes with six airbags as standard equipment and that means that both front and rear-seat passengers are covered.

There’s also Electronic Stability Control, Anti-locking Brake System, Electronic Brakeforce Distribution, Electronic Brake Assist and Traction Control and while those things are not what you’re likely to think about while you’re driving it is reassuring to know that you’re a lot safer in today’s Holden Commodore than in years gone by.

The seats in the Berlina were adequate and both front seats have great lumbar support but I don’t think that I had enough support under the backs of my legs. The Sportwagon’s seats are definitely a lot better than recent Falcon seats but in my opinion there’s still not enough support there.

The Berlina Sportwagon comes equipped with dual-zone air conditioning as standard and the air conditioner can certainly handle the hot and humid conditions that can envelope you in this part of Australia.

There’s a very good six-disc CD audio system with MP3 compatibility and auxiliary input jack with the audio controls are mounted on the steering wheel. There’s Bluetooth compatibility for mobile phones and there’s also Rear Park Assist but a rear view camera is only an option. While you may not need the camera it’s certainly worth the extra cost if you have small children around.

There’s also a multi-function trip display that can provide you with a large amount of important information. Interestingly that trip information is displayed across three different places on the dash. That may sound as though it might be a little too much information to take in as you drive but it’s actually quite easy to read and it works rather well.

Luggage space
While the Sportwagon does not have the biggest luggage space of the station wagons in its class it does have a very credible 2000 litres of space once the rear seats are folded down completely. 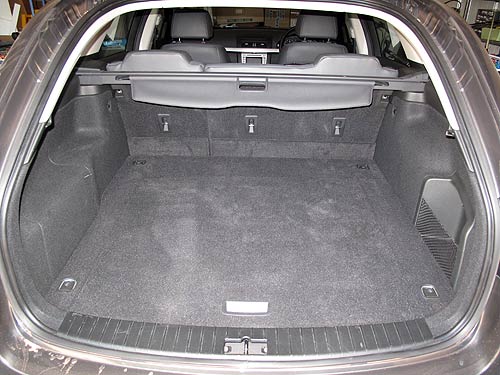 The rear seat does have a 60/40 split or you can fold it right down and whichever option you choose you will find that folding the seats down is very easy. There’s no fiddling around trying to get the seatbelts out of the way of the back of the seat so getting to full carrying capacity is quick and easy.

Bringing the back of the rear seats back into the upright position is just as simple and the seat back isn’t heavy so even a child can get the rear seats set up without a struggle. 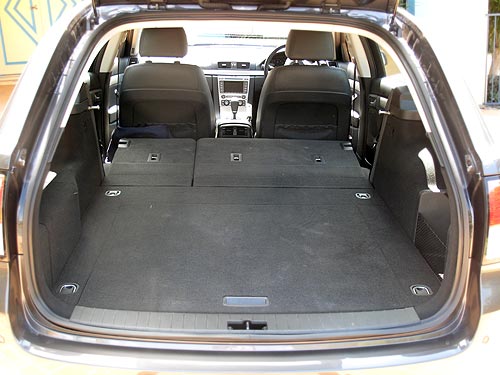 With the backseat in the upright position there is plenty of room for the luggage that an average family might want to take away with them. With the backseat folded down you can carry a lot of stuff to the tip … to the car boot sale or back from the hardware store. If you’re a sales rep it will carry everything you want to have with you to show your clients.

Annoyances
The Berlina Sportwagon is a great car to drive but it does have some annoying features. It chimes when you start it … it beeps when you select Reverse and if you want to insert a CD is scares the crap out of you with several warning sounds that will certainly wake the kids if you’re on a trip and they’ve dropped off to sleep.

Now surely if I select Reverse then I’m doing it because that’s what I want to select and I don’t need to be warned about it. If I were to select it by accident then what’s the point of warning me … if I’ve somehow managed to do that at speed then no amount of warning is going to save me from the consequences.

As for the CD’s … hey I’m only inserting a CD … I’m not taking the country to Defcon 3 so why do I need to get zapped with a warning every time I put a disc in or take it out.

I know … those are little fiddly bits in the grand scheme of things that is the Holden Berlina Sportwagon and they would probably fade into the background over time … but they sure didn’t in the week that we had the car.

So would I actually buy a Holden Berlina Sportwagon? Earlier I said that I probably wouldn’t and that’s because I just have no need for a large station wagon at this point in my life. But if I did have a need for one then this would certainly be my wagon of choice and I would certainly opt for the Berlina over others in the Sportwagon range.

It’s better appointed than the base-model Sportwagon and has everything that I would look for as far as comfort and luxury is concerned. It’s also got all the get-up-and-go that I would need and it’s got the sporty looks too.