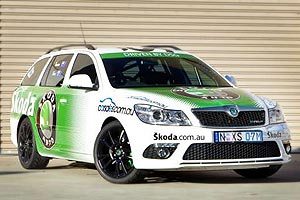 The 2010 Targa Tasmania starts on Tuesday … it’s a tarmac rally that attracts some very exotic machinery but I don’t think that anyone has ever entered a station wagon in the Targa before now. However next Tuesday that’s all going to change.

Škoda Australia has announced its Australian tarmac rally debut in this year’s Targa Tasmania with its unique Octavia RS-P.

Built around the Octavia RS Wagon, with its 147kW turbocharged 2.0TSI engine, the RS-P has undergone a serious upgrade to make it the ideal Targa Tasmania competitor.

The engine control unit (ECU) has been retuned resulting in over 190kW and 350Nm, fully adjustable racing dampers have been added along with a front strut-brace, and the brakes have been upgraded to 345mm discs with four-pot callipers up front and 310mm discs clamped by single piston callipers at the rear. The RS-P maintains its standard, paddleshift, 6-speed DSG transmission.

Skoda believes that weight reduction is the key to a successful motorsport campaign, so the RS-P has shed weight. Its rear seats have been removed and specialist racing seats with six-point harnesses have replaced the standard RS front sports seats. 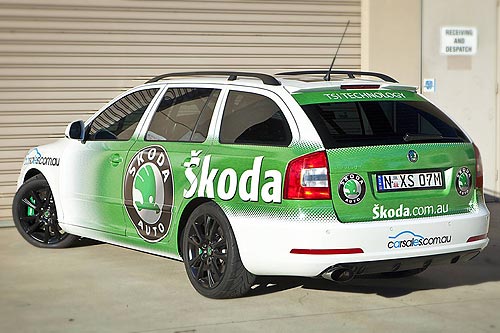 Although Škoda internationally has had a long and distinguished history in motorsport, with many successes in the World Rally Championship and the Intercontinental Rally Challenge, this will be Škoda’s first foray into tarmac motorsport in Australia.

“Targa Tasmania will be a great opportunity for Škoda Australia to showcase what the brand can do in the southern hemisphere’s premiere tarmac rally event with essentially an automatic Wagon,” said Matthew Wiesner, Head of Škoda Australia. “With over 100 years of experience in motorsport internationally, along with the experience of our competent drivers, it will give people in Australia a taste of what the brand does in Europe and the strength of our engineering and technology.” 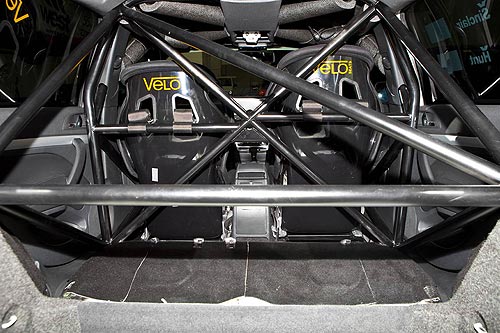 Skoda’s entry into Targa Tasmania, in the LMS category (the lightly modified production vehicle class) is being supported by the Carsales Network and the RS-P will be driven by experienced motorsport competitor Mike Sinclair and his rally co-driver Justin Hunt.

Targa Tasmania will be held from April 27 to 2 May and is one of the world’s toughest tarmac rallies. The 2000km long event is made up of around 40 special closed road stages and regularly attracts more than 300 entries.