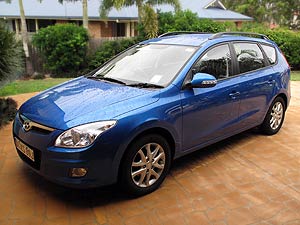 Genuinely evaluating new vehicles can be difficult at times. We all carry prejudices, pre-conceived ideas and a whole bunch of other baggage with us and leaving it behind when we jump into a new car can be a challenge no matter how hard we try.

If you’re not a small-car person then what filters are you going to run your experiences through if the car you’re evaluating is a small car. If you prefer to ride up above the crowd in a big SUV then what is going to influence you when all you can see from the car your testing are the wheel-nuts of a B-double in the lane next to you?

Most of us seem to do a good job of being objective … well some of us do and the others have their favorites and it’s not hard to read between the lines and discover what they would rather be driving.

So having said that let me tell you that both testers here at AussieMotoring.com are not small-car people … in fact we’re not small people. We’re both tall and our knees and backs have seen better days so long trips in small cars are not what we look forward to.

That meant that basically we were approaching the road test of the Hyundai i30CW with some reluctance. Although it’s certainly not as small as the Hyundai Getz the i30CW is a small car… even configured as a station wagon … and it’s about a four hour drive from Hyundai’s Brisbane office back to our office in Hervey Bay so there was some reluctance … although neither of us had actually articulated it to the other on the trip down. 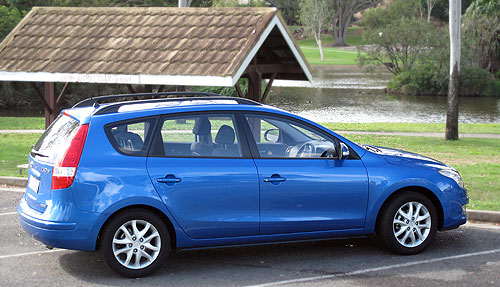 However … two corners, 200 metres and five minutes into the trip home and the first comment from Toni who was driving at the time was …

“Hey this is alright!”

And it was and by the end of the trip back we were ready to fight to see who got to drive the wagon the next day!

Sure it’s a small car … sure those wheel-nuts on the B-doubles look huge as you pass them but the turbo-charged diesel 1.6-litre four-speed automatic Hyundai i30CW SLX that we’re driving went like a rocket.

It breezed up the highway at 110km/h, it cruised in those crazy stretches where 90km/h is the speed limit and it zipped along the rougher back roads that we take to avoid much of the traffic in the single lane sections of the Bruce Highway.

It was quiet … it was very comfortable … it was very economical … and there were no complaints from our knees or our backs when we pulled up in front of our office. Sure it’s a diesel and it sounds like a diesel but it’s got a turbocharger that makes you forget you’re driving a diesel.

Yes … there’s the occasional momentary lag in acceleration that seems to be a common trait of turbo-charged diesels but it doesn’t happen all the time and when you put your foot down it’s ready to fly.

If there’s any complaint we have after the first 24 hours it’s that we can’t get the fuel consumption figures down to what Hyundai says the vehicle is capable of but the 5.9L/100km that we did get on the highway is definitely not shabby. 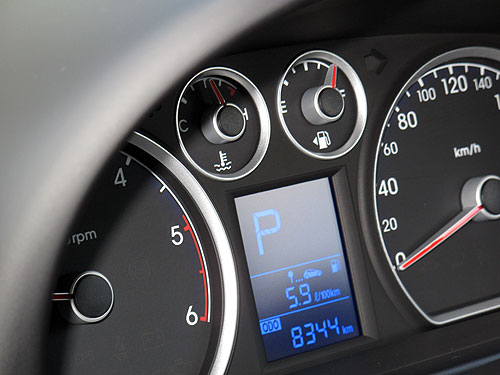 So that’s where we’re at after 24 hours in the Hyundai i30CW … I doubt that it’s ever really going to convert us into small-car people but it’s a lot of fun to drive and even now I’d certainly recommend it to anyone who has small loads to carry and wants a nippy little wagon that also delivers great fuel consumption.