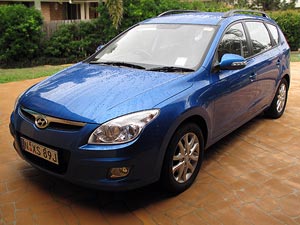 Our week in the diesel version of the Hyundai i30CW … that’s the wagon version of the very popular Hyundai i30 … came in the middle of a solid month of road testing everything from a Holden Sportwagon right through to the latest top-of-the-range Hyundai Santa Fe and included the just released Hyundai ix35.

We covered thousands of kilometers over all sorts of roads in those vehicles … we took photos … we compared notes as we bounced over dirt roads and zoomed around hairpin bends … we folded and unfolded seats … we came to grips with different dashboards that wanted to give us different information … we learnt what different sounds in different cars meant and we seemed to be in and out of new cars more frequently than we had hot dinners.

Last weekend when all the testing was over and we were back in our old banger Toni asked me which of those four vehicles stuck in my mind and the answer was this one … the Hyundai i30CW CRDi and surprisingly it was the one she remembered with the most fondness too.

Why did that one leave me with the positive impression? I’m blowed if I know but it did.

What I liked about it

What I didn’t like about it
If you have to put a baby capsule in the back seat you may just find that the front seat has to go quite a long way forward and a tall passenger may have problems..

Full review
There are five models in the i30CW lineup … three petrol and two diesels and the vehicle we tested was the SLX version of the diesel i30 wagon. If you look back at my first impressions of the Hyundai i30CW you’ll see that I wasn’t really looking forward to it but that had changed in the couple of hours it took to get from Hyundai’s Brisbane headquarters to our office in Hervey Bay.

From the time I got behind the wheel I felt comfortable. There was plenty of room for me to stretch out my long legs and the seats were firm and offered plenty of back support. The dash layout was easy to read … the controls were intuitive and within easy reach … and I wasn’t overwhelmed with information. Everything the driver needs to know is right there in front of them and you’re not getting overloaded with information or given the information in such a way that requires some thought. 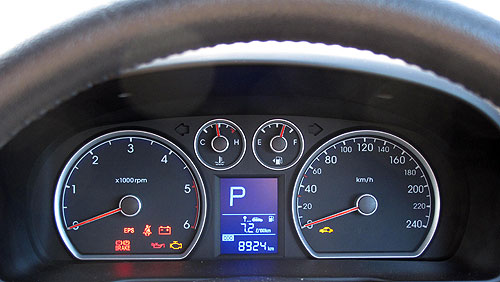 For example the fuel gauge and temperature gauge are just simple dials … they’re easy to read and a quick glance is all you need to know exactly what they want to tell you. They’re not fancy meters that want to give you the information in bar graphs or some other way that requires more than just a quick glance. 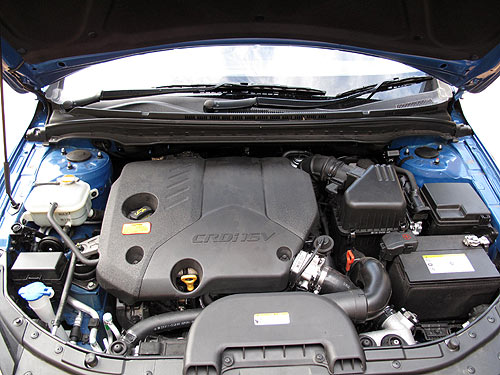 The engine and transmission
The Hyundai i30CW CRDi is powered by a 1.6-litre diesel engine that comes with a variable-geometry turbo-charger. In layman’s terms it’s a diesel … it sounds like a diesel but it goes like a sports car. You put your foot down and it responds. It’s equally at home in town or country driving and it cruised effortlessly at 110km/h

The SLX CRDi comes with a four-speed automatic gearbox as standard. These days a four-speed auto box seems like a throw-back to the dark ages … until you drive it. Before we picked up the car I hadn’t had time to do my homework so all I knew was that the wagon we were picking up was an auto.

When I got behind the wheel I stuck the gear selector in ‘D’ and off we went. It took a while for me to realise that there were only four forward speeds in the gearbox. Throughout the week we drove the i30CW I never found it struggling to be in the ‘right’ gear for the conditions and gear changes were very smooth.

Cruise control worked well in this car too. Once you set the speed that was what the car traveled at and it didn’t let the car’s speed drop on steep hills while it thought about changing down to a lower gear.

Fuel consumption
With a four-speed box you could reasonably expect your fuel consumption to be a little on the high side … even if the motor is only a 1.6-litre diesel … and maybe it is if you consider 5.9L/100km to be high.

That’s the fuel consumption figure we achieved on the highway on the way back to our office. Around town it was certainly higher but 8.2L/100km (the worst consumption we got) is a whole lot less than most vehicles will give you in town and city driving.

Safety
The vehicle we tested comes with ABS and electronic brakeforce distribution, Electronic Stability Programme and traction control, reverse park sensors and front fog lamps. Front and side airbags are fitted for front seat occupants and there are side curtain airbags for front and rear seat occupants too.

Pretensioners and load limiters are fitted for front seat occupants and the front seatbelts are height-adjustable. 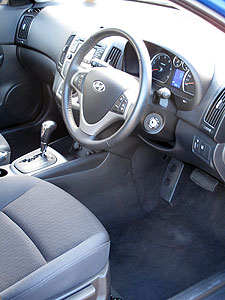 Interior
If there’s one thing that small kids do well in cars it’s make a mess. They drop food, they vomit, they bring in mud on their shoes … they’re just plain messy. If that’s your family and you want to buy a small wagon then the Hyundai i30CW is going to be good for your family.

The floor coverings and the upholstery look like they can take quite a beating and clean up without a great deal of effort. I managed to get a fair bit of sand, grass and dirt into the driver’s footwell and after a minute with the industrial vacuum cleaner at the car wash all the mess had gone.

As I said before, the seats themselves are very comfortable and there’s plenty of back support as well as support under the backs of your legs. There’s plenty of legroom for front seat occupants but of course the further back you have the seats the less room there is for rear seat passengers.

If you have to fit a baby capsule then you’ll find three mounting points for the rear strap so that you can place the capsule anywhere you want on the back seat but realistically the only place it could go is behind the passenger … unless of course the driver is vertically challenged. 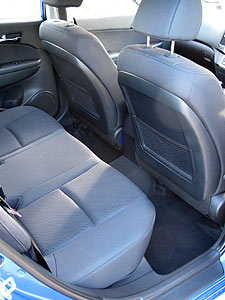 Interior comfort
The climate control in the vehicle we tested was excellent and it will certainly keep the interior of the i30CW cool on hot days.

As with most small cars, it’s not perfectly quiet inside. Noise from outside does come in even if the windows are up and the sound of the diesel engine can be heard. But the sound levels are certainly not uncomfortable and you may not even notice it.

The sound system that’s fitted to the i30CW is perfectly adequate and the MP3 USB port located in the storage box between the front seats is a great idea. I don’t think we ever got to the end of all the music we have on one of our memory sticks.

The glovebox isn’t huge but it is cooled by the airconditioner. We love that idea and when we were heading out on a trip we’d toss a couple of chocolate bars in there to keep cool till we were ready to snack on them.

Luggage space
Most people who buy a station wagon are going to want to carry things and the Hyundai i30CW certainly gives you plenty of space for all that stuff you want to carry. 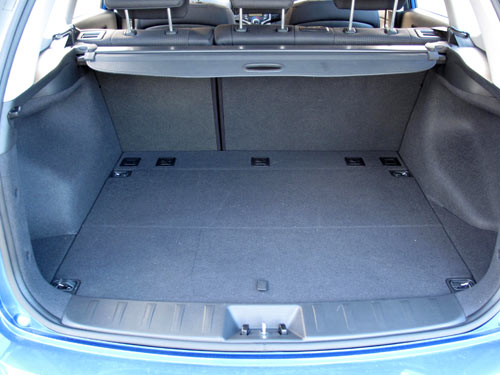 With the rear seats in the upright position there’s 415 litres of space and with the rear seats folded down that available space increases to 1395 litres. That compares quite favourably with other small wagons in this segment. 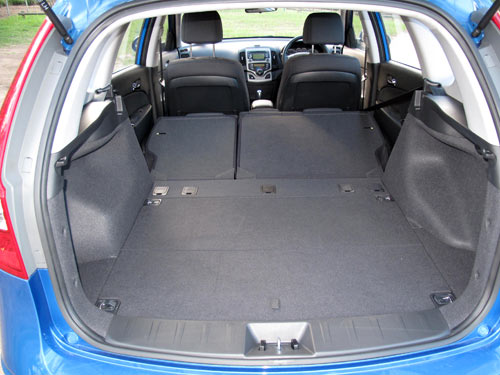 The i30CW comes with a very sturdy cargo blind and the SLX also comes with a cargo net and there are plenty of anchor points for it around luggage area.

Storage compartments abound in the i30CW and you’ll see from the photo that shows the spare tyre that there are even a number of storage spaces tucked away under the luggage space floor.

Driving the i30CW
This is a car that’s easy to drive … there’s good all-round vision and it’s easy to park in confined spaces. The rear parking sensors certainly do help although the ones fitted to our test car did seem to be a little sensitive and often sounded when I passed over a very slight incline as I backed out of our driveway and onto the road.

The first time that happened I had to get out to make sure that I hadn’t just skittled the neighbour’s cat.

On the open road the i30CW cruises effortlessly and when you need to put your foot down to overtake the turbo-charged diesel is very responsive … you might even find it a little scary the first time you put your foot down and you discover just how quickly the wagon does accelerate. Although you’re driving a diesel and some of that distinctive noise does come back into the passenger compartment it’s certainly not overwhelming and the tyres that are factory fitted don’t seem to generate a lot of road noise. 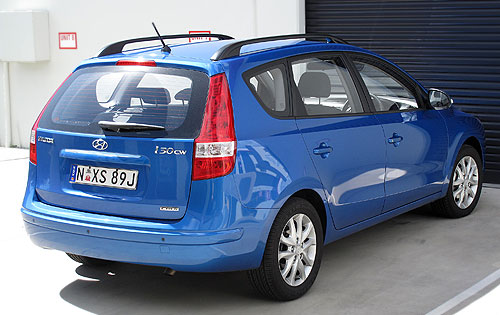 Conclusion
The Hyundai i30CW CRDi was a vehicle that we approached with some trepidation … as I said in my first impressions of the i30CW neither tester here at AussieMotoring.com is a small-car person and we weren’t looking forward to a week in a small car. However, five minutes into the trip back to the office and we were beginning to change our minds.

After a week in this vehicle I can say that the Hyundai i30CW CRDi is a great little wagon and definitely worth buying if you’re in the market for a small station wagon or you need a small car with some extra capacity. Hyundai have certainly achieved what they set out to do when they brought out the station wagon version of their popular i30.

One thought on “The Hyundai i30CW CRDi Road Test”