Skip to content
Posted in News By Stuart LiveseyPosted on May 17, 2010September 14, 2018Tagged Toyota Rukus 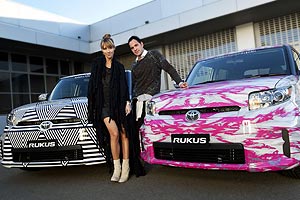 Tomorrow Toyota will be revealing their latest vehicle … the Rukus … to the press in Sydney and AussieMotoring.com will be there.

Toyota wants buyers of the Rukus to express their individuality by customising the Rukus in ways that are only limited by their imagination … and what’s legal.

To help prospective buyers to get into the right mind-set when it comes to customisation Toyota had two leading fashion designers work their magic on the Rukus.

Kirrily Johnston decided that her Rukus would look good with a strong tribal theme and produced a scheme that features stripes and geometric patterns.

Fernando Frisoni … better known for his funky street menswear … decided that his Rukus was feminine and produced a theme that he describes as cotton candy.

So what will we see tomorrow at the press release … Toyota says that the Rukus is definitely an “acquired taste” and I’m rather partial to quirky cars so I’m definitely looking forward to what Toyota describes as an “urban utility vehicle”.

I wonder if they’ll let me take it bush any time soon?