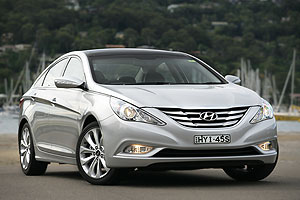 The Hyundai i45 … Hyundai’s latest medium-sized car … is now in the showrooms and the i45 should really be making the opposition just a little nervous.

Well … if you’re Toyota you won’t be too worried even though the i45 is a car that sets a whole new standard for the mid-range market. Toyota still has a lot of image in the bank with consumers and Hyundai probably won’t overcome all residue of goodwill that Australians have for Toyota and their Camry.

Toyota isn’t being so lucky in the United States where the i45 is selling in big numbers.

The Hyundai i45 is a car with real presence … its striking lines catch your eye and tell you that this is a car that moves and when you look inside it’s game over for the others because the i45 delivers an equipment standard that’s hard to beat. 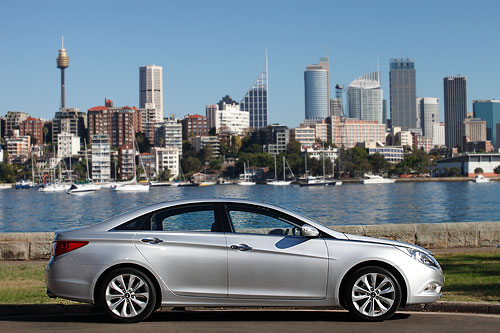 Really taking the i45 out for a test drive is just a formality because buyers are going to be convinced that this is the car for them even before a salesman puts the crosshairs on them.

That’s not to say that this car is perfection on wheels because it isn’t. It has its faults but you probably won’t notice them and even if you do it’s not going to change your mind about the i45.

‘Oh wait’ I can hear you say. ‘isn’t this is the self-confessed Hyundai fanboy talking here?’

Yes it is but I’ve driven it and I know what I’m talking about and once you’ve taken it for a drive you’ll think it’s pretty good too.

Basics
The Hyundai i45 comes in three models although there’s only the mid-range Elite and the top-end Premium are available right now. The entry level Active will be available around July.

The same 2.4-litre direct-injection naturally aspirated petrol engine powers all three models. It’s an all-aluminium engine that is light, fuel-efficient and very responsive. On the familiarisation drive … out of Brisbane and along my favorite stretch of hilly, winding road around Somerset Dam … the i45 accelerated effortlessly and there was no excessive engine noise in the cabin. 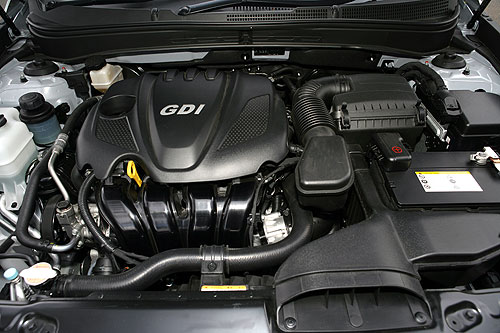 You certainly knew that the engine was working but the noise was not overwhelming.

That’s the first time I’ve driven a vehicle with those fitted as standard and they were fun to use. You can leave the gear stick firmly planted in Drive and use the paddles for a quick down or up shift and the transmission will hold the gear you’ve selected for 15 seconds before reverting to the automatic selection. 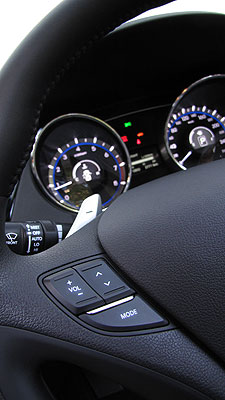 Those gear paddles are quite handy actually but perhaps not in the way Hyundai thought they would be. You still get instant downshift when you stamp on the accelerator as you overtake so you don’t need the paddles there but several times on hills I found the engine wanted to change down a gear and the transmission just wasn’t interested. A quick tap on the paddle and everyone was happy.

Comparing notes with other motoring writers at the press launch revealed that several of them had found the same reluctance in the auto box to change down on hills … see, I did say this car wasn’t perfect.

Dusk sensing headlights and front fog lamps are also available across the range while a reverse sensing warning system is standard on the Elite and Premium models. 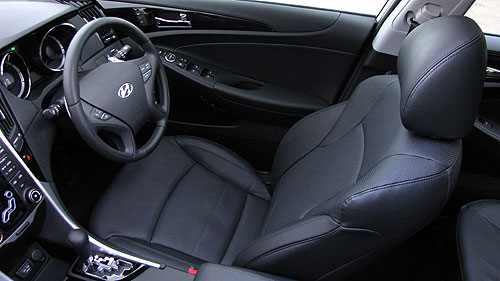 The front seat occupants have pretensioners and load limiters fitted to their seatbelts and the side mountings are height-adjustable. There are three mounting points for capsules and child seats across the rear seat.

Specifications
Hyundai have a very clear idea of what their competition is in the mid-sized market and they have prepared a comparison chart so potential buyers can see how well the i45 compares with everything from a Camry to a Ford Mondeo and a VW Jetta.

You can grab a copy of that chart as a PDF download by clicking here.

The audio system in the Active and Elite includes a single-disk CD player and USB input with iPod compatibility and that’s upgraded to a premium audio system with Woofer and Amp and a six-stack CD player. 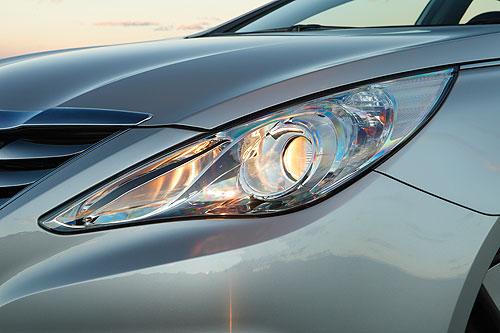 Comfort
I loved the way the front seats in the Elite and Premium seemed to wrap around you. There was good back support and support and the leather upholstery was definitely of a different grade to what you might have experienced in the past. There won’t be any embarrassing squeaks as you slide in and out of the Hyundai i45.

Luggage space
It’s huge … it’s not the biggest in the mid-range category but it’s still big enough to swallow a heck of a lot of luggage and if you want more space the back seats are your usual 60/40 split fold.

Unfortunately I can’t show you a photo of just how big the luggage space is … the only photo of the boot that was handed out with the press kit was taken from the side and shows a boot with a couple of sets of golf clubs in there and it doesn’t really do justice to the size of the boot.

The big boot doesn’t come at the cost of a full-size spare either. It’s there, tucked away under the floor of the boot.

I guess you’ll just have to wait for a good look at the boot till we get our hands on an i45 for a week’s drive and then we can really go over it with the camera.

Driving experience
The Hyundai i45 looks like a car that’s on the move … even when it’s standing still (well almost) … and it’s not just all show and no go. This is a car that will cruise effortlessly at highway speed … unfortunately with some road noise getting into the cabin … and it always seems to have some in reserve.

The ride around the city and out on the highway was smooth and that smooth ride continued when we got onto relatively rough rural roads west and north of Brisbane. On the tight winding sections around Somerset Dam it held the road with no body roll even though I pushed it through some curves at well above the advisory … but still within the legal … speed limit. 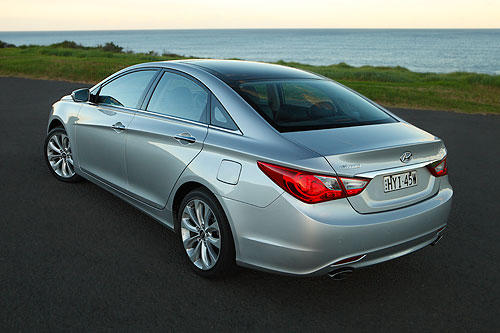 There were definitely no scary moments in those curves as I pointed the car in one direction and suddenly found that it wanted to go somewhere else and there were no white-knuckle moments for the other motoring writer who was sharing the driving with me either.

When I needed to pass caravans and slow drivers the power was there and the suspension system that has been tweaked for Australian conditions certainly kept the car in a straight line when we had to drop the passenger-side wheels into the dirt to pass oncoming traffic on some narrow roads.

Conclusion
Hyundai believe that this vehicle will appeal to families with older kids and even empty-nesters who are looking for outstanding quality at a great price and Hyundai is certainly focused on the price point.

Hyundai i45 – a first look and drive