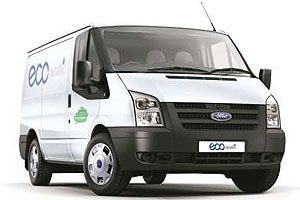 Car owners aren’t the only ones that look for good fuel economy in the vehicles they buy; commercial vehicle operators are perhaps even more concerned about fuel economy because it has a direct impact on their bottom line. As fuel costs rise van and truck owners are going to be looking even more closely at fuel consumption figures before they rush in to buy new vehicles for their business.

While every van manufacturer is well aware of how important fuel economy is it seems that Ford is the first to do something serious about reducing fuel consumption in its commercial vehicles.

The Ford Transit ECOnetic Van will feature a 2.2-litre diesel engine coupled to a six-speed manual transmission. Other features that help reduce the fuel consumption are low rolling resistance tyres, aerodynamic wheel covers and low friction oil. Drivers will also have some help from a green-shift indicator on the dash.

The Ford Transit ECOnetic will go on sale in July with a list price of $36,490 … registration, stamp duty, CTP, dealer delivery charges etc. will be extra.