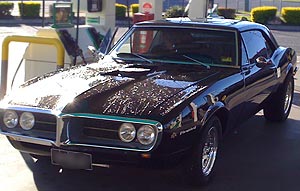 The Pontiac Firebird was the last of the big three muscle cars. Both Ford with their Mustang and Chevrolet with their Camaro beat Pontiac to the market but by mid 1967 Pontiac was there with the Firebird.

The Pontiac Firebird was offered with a range of six and eight cylinder engines and as both a hardtop Coupe and a Convertible. By the time the last 1967 Pontiac Firebird rolled off the production line over 82,000 had been built with the Coupe accounting for just over 67,000.

I caught this beautiful right-hand version last weekend in a servo here in Hervey Bay. Unfortunately I had to rely on my mobile phone to get the photos so they’re not great but the Firebird was just too much to pass up.

We followed it up the road for a short while and the exhaust note was beautiful.