Skip to content
Posted in News By Stuart LiveseyPosted on September 26, 2010September 14, 2018Tagged Audi, Audi A1, Audi A1 TFSI 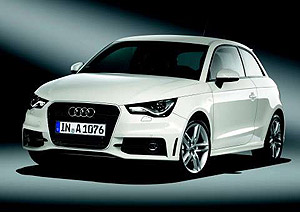 The compact market is flooded with models … every car maker on the planet has something that could be described as a compact because that’s where the market it right now and where it’s going to be for years to come.

So what do you do if you want a compact but you really want to stand out from the crowd? Well you wait till the Paris Motor Show opens later this week and then you head for the Audi stand where you’ll find the new Audi A1 1.4 TFSI … it’s a compact that really stands out from the crowd.

The Audi A1 1.4 TFSI may not have anywhere near as much grunt as the new Ford Focus RS but it carries the Audi badge and nothing says “I’m special” more than those Audi rings of confidence. And then of course there’s the 227km/h top speed and an average fuel consumption of 5.9L/100km from its supercharged and turbocharged light-weight four-cylinder engine.

The supercharger spins into action at 1,500 rpm, and in most situations is disengaged at 2,400 rpm. From 3,500 rpm at the latest, the turbocharger takes over and does all the work. Because it doesn’t have to do as much work at the lower end of the rev range, the developers were able to use a large turbo and design it for high efficiency.

The standard seven-speed S tronic transmission directs the power of the 1.4 TFSI to the front wheels. The seven-speed S tronic box is composed of two transmission structures which are operated by two multi-plate clutches. The shifting process takes place in just a few hundredths of a second, and with no detectable interruption of pulling power. The tall seventh gear allows relaxed cruising speeds and reduces fuel consumption.

The McPherson construction at the front, and the torsion-beam rear suspension with separate springs and dampers give the Audi A1 some great handling characteristics.

The Audi A1 1.4 TFSI turns in sharply, takes corners quickly and stably, and accelerates out of them with sure-footed grip. And 228mm diameter brakes give the car plenty of stopping power.

Another specialty that comes standard for the chassis is the ESP stabilization program with electronic limited slip differential. When the system detects an impending loss of traction at the inside wheel during fast cornering, it initiates very brief braking of that wheel.

The safety package that comes with the new Audi A1 comprises two front airbags, thorax/pelvic side airbags and curtain head airbags. Belt tensioners and belt force limiters plus the Audi integral headrest system round out the package. Isofix child seat anchor points in the rear are standard.

Audi have allowed a number of luxury-class features to find their way down to the A1 too. These are the xenon plus headlights with LED daytime running lights, LED tail lights, LED interior lighting package, high-beam assistant, light and rain sensor, panoramic sunroof, convenience key with the start-stop button, two navigation systems and a 465 watt Bose surround sound system with 14 speakers. Manual and automatic air conditioning systems plus heated front seats are also available.

The Audi A1 1.4 TFSI will be launched in Europe toward the end of the year with a price tag of $A34,093 at today’s exchange and hopefully it will find it’s way out to Australia early next year.