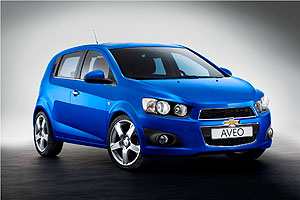 The Holden Barina has been around for … well years … and years … and over that time it’s been sourced from Germany, Japan and Korea depending on how the dollar was going and which GM subsidiary had a small car that fitted the image and the production capacity to meet demand.

However we could soon see the end of the Barina name and even though the name may be retained, the current Barina as we know it, is sure to go because GM have just announced that their new global small car will be the all-new Chevrolet Aveo.

The research, development and design that went into the Aveo was done by Daewoo so it’s not surprising that the Aveo will initially be built in Korea and released. The Korean market will also be the first to get the Aveo even though the Aveo concept car was first displayed back in January at the 2010 North American International Auto Show in Detroit.

So what will we get in the Holden Aveo/Barina? Well the new Aveo is longer and wider than the Barina and inside you’ll see what GM describe as a “motorcycle-inspired instrument binnacle which features an analogue tachometer combined with a digital speedometer and warning lights”.

Up-market blue backlighting on the centre console is a feature of the new Aveo as is a wrap-around fascia that envelopes the whole front cabin.

The new Aveo will come with a range of four-cylinder petrol and diesel engines that incorporate technologies such as variable valve timing, double continuous variable cam phasing and common rail fuel injection for the diesels.

GM/Holden are yet to announce when the Aveo will be available in Australia.