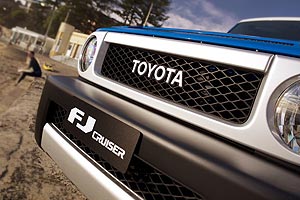 The FJ takes its name directly from the 1960s-era FJ40, which was known as the vehicle that could travel to – and return from – any extreme environment.

Toyota has not merely reinterpreted its classic FJ40, it has created a whole new vehicle – one that will appeal to younger drivers who know nothing about the old FJs.

While the design has strong “retro” elements, there is nothing old-fashioned about the technology under the bonnet or the driving performance.

FJ Cruiser is designed for serious 4WD enthusiasts – owners who want to do more than cruise down the highway in their sporty off-roader. 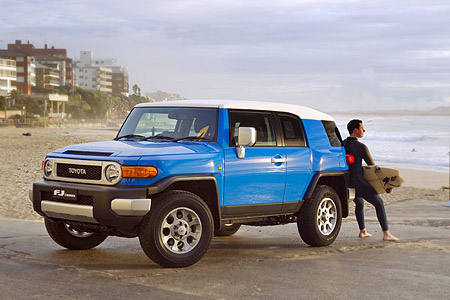 It is powered by a 4.0-litre petrol engine with variable valve timing on both the intake and exhaust camshafts for an optimum combination of power and economy.

Maximum output is 200kW and 380Nm – willing performance that is put to the road through a five-speed automatic transmission and a part-time 4WD system with a dual-range transfer case.

Double-wishbone coil suspension at the front and coils at the rear provide large wheel articulation and impressive fording capability, while there is excellent ground clearance.

The FJ Cruiser’s exterior styling provides the most obvious connection with Toyota’s roots – body-on-frame structure, stocky appearance, unique “Toyota” badge on the grille, and the arrangement of its headlights and grille.

Setting it apart from any other SUV, its retro-inspired styling includes a near vertical windscreen with three wipers, white roof (irrespective of body colour) and wrap-around rear windows. 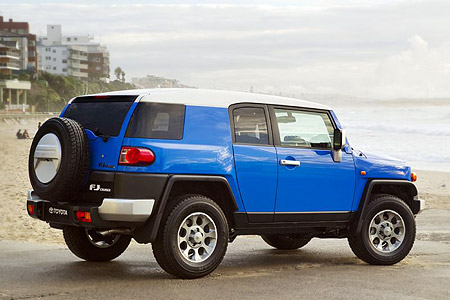 Inside, there are two rows of seats with standard-size front door and smaller, reverse-opening rear doors.

In keeping with the FJ’s mantra of “style and substance”, Toyota has opted for a “no frills” interior, including moulded floors for easy cleaning.

You’ve got to love that idea … there’s no easier way to clean the inside of a 4WD than by turning the hose on it although a staff member here may have found an even easier way. At one time there were some photos in existence of an early Pajero parked in the middle of the Macquarie River between Bathurst and Hill End back in 1987 with water flowing through the cabin after it was bogged there for 24 hours by a certain Aussie Motoring writer.

FJ Cruisers for Australia will be produced in Japan.