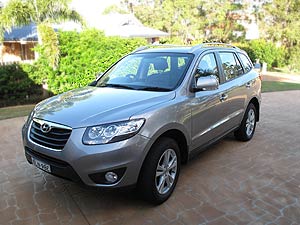 Some road tests just want to write themselves … others are hard to write … and some just don’t want to get written at all … and our road test for the Hyundai Santa Fe definitely falls into that category.

We tested the Hyundai Santa Fe Highlander back in May and every time since then that I’ve sat down to write this review something happens. We’ve had ill-health … computer malfunctions … lost photos … and sudden huge influx of work for Toni’s business that kept us doing lots of things that just ate up her time… her staff’s time… and even my time.

But today the time has come to get this thing written because it’s become an albatross around my neck and it’s time to get rid of it. So ladies and gentlemen I give you our review of the Hyundai Santa Fe Highlander … the top of the range Santa Fe that Toni loved and I … well … ok … the original Hyundai fanboy didn’t like much at all.

You’ll find a complete overview of the Hyundai Santa Fe here and that will explain the differences between the three models in the Santa Fe range. You’ll also find our first impressions of the Santa Fe here. 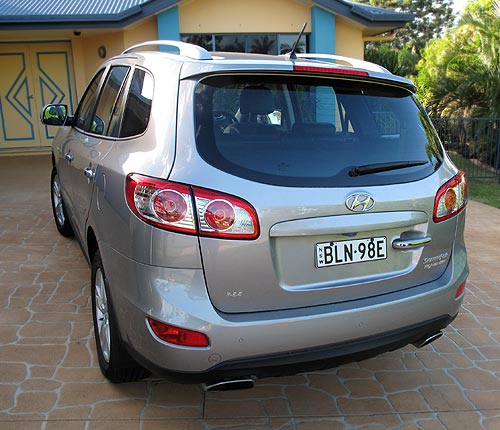 Those first impressions … gained on the four to five hour trip back from Brisbane to Hervey Bay via the back roads around Somerset Dam – were very positive and our week in the Santa Fe only served to confirm those impressions for Toni … but not for me.

Our test vehicle was the top-of-the-range Highlander fitted with a 2.2-litre four-cylinder diesel engine coupled to a six-speed auto gearbox and all the goodies you would expect … including two airconditioners. Yes, as Toni noted in her first impressions article there are two airconditioners … one for the front and second row passengers and one for the back row and they are very good at keeping the large interior cool in hot and humid Queensland . 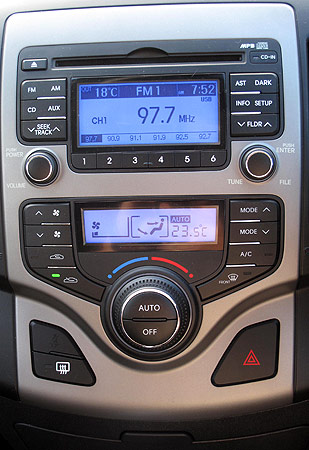 Ride and Handling
The ride was very good and on the bitumen. Whether it was the highway or rough back road … the Santa Fe handled like a small car. There was little in the way of body roll and it went where you pointed it without complaining.

It had the same handling characteristics on rough dirt forestry roads too. Over ruts and potholes it stayed in a straight line at high speed. The suspension absorbed a lot of punishment and we weren’t tossed about inside the vehicle but there were some odd noises coming from the rear of the vehicle at times. Those noises disappeared when we got back on the bitumen.

However there were other dirt roads where the handling became less than positive. Toni was driving when we took a dirt road down to a little fishing village on the Great Sandy Straights.

Unlike the forestry roads this one was a lot smoother but covered in loose gravel and when we hit a slight bend at 80km/h the Santa Fe became very interested in pointing us back the way we had come … not something that Toni was expecting from an all-wheel drive vehicle.

While Hyundai’s promo photos show the Santa Fe driving over some fairly rough terrain that’s not something that either of us felt confident in trying … sure our Santa Fe may have been fitted with a diff-lock but it isn’t a genuine 4WD and it’s easy to become overconfident and get stuck in a vehicle that doesn’t have a low ratio gear set. 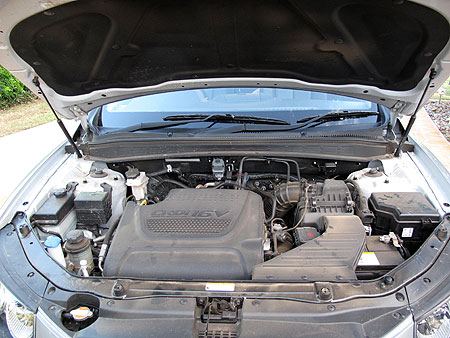 The engine
As I’ve said, the Santa Fe we tested was the 2.2-litre diesel and you will always know it’s a diesel. The unmistakable diesel rattle was quite noticeable outside the vehicle and you could certainly hear it inside the vehicle too.

The engine was quite responsive and the six-speed box was fine around town and out on the open road. The gearbox is fitted with the usual gear selector that also allows you to change up or down manually and the only time that was used was while we were pushing the Santa Fe through the forests. It’s a great way to control your speed on dirt roads without resorting to the brakes … something that can bring you unstuck if the curve you’re approaching is a little tighter than you expect.

Economy
On the trip back from Brisbane we managed to achieve a very credible 6.8L/100km … credible because we were giving the Santa Fe quite a workout over some tight winding roads. Around town … over some very short distances … 7.2L/100km was about the best we could get.

Comfort
The seats are very comfortable … there’s great back support and plenty of support under the driver and front-seat passenger’s legs. Toni loved the driving position and had no problems adjusting the driver’s seat to suit her height. 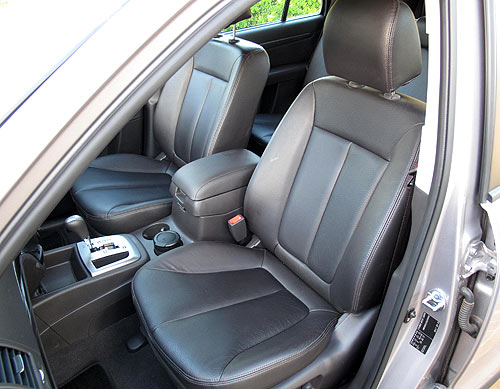 Lucky her! For me the driver’s seat just didn’t go back far enough and I began to find the driving position quite uncomfortable. I became so uncomfortable that I started to find excuses not to drive the Santa Fe around town so Toni got plenty of time in the driver’s seat … and when she wasn’t around I took our other car.

While we had no complaints from the people that we carried in the back of the vehicle one Santa Fe owner I spoke to was less than impressed with the lack of movement in the middle row of seats. While you can adjust the rake of the back of the seat you can’t move the seat forward or back and that was something her kids … especially those that had to ride in the third row … had problems with. 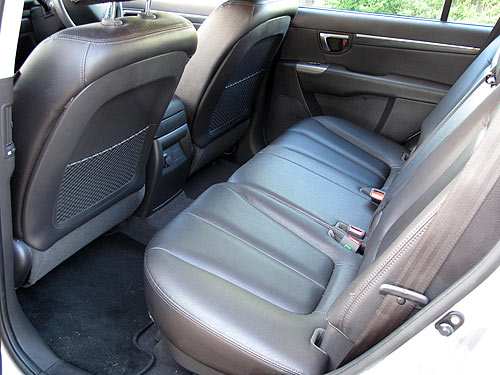 While we’re thinking about the seats just have a look at the photo that shows the top corners of the rear row of seats when the back door is open. Yes you are seeing that the back of the seat protrudes outside of line of the vehicle … fortunately the door is curved in such a way that it encloses the back of the seat without crushing it.

For the driver everything is quite handy and you don’t have to reach far to find the control you want. We did stop and count all the buttons … knobs … dials etc. that the driver could push … twist … press or move and came up with over 50 of them but don’t let that overwhelm you. Most of those buttons etc. are set and forget.

Safety
There are plenty of airbags in the Santa Fe Highlander and lots of other safety features to keep everyone safe but there is one piece of safety equipment that is all but useless in daylight … in fact it’s more of a distraction than any sort of aid … and that’s the reversing-camera display.

Of course you are but during daylight there’s a lot of bright light around and mirrors reflect that light don’t they?

The rear-view mirror in the Santa Fe reflects so much light that you can hardly see the camera image and you can become so focused on trying to see what the camera is showing you that you reach the point where you’re not paying attention to what’s happening around you.

That was one major aspect of the Santa Fe that neither of us liked.

Luggage space
There is plenty of luggage space in the Santa Fe and both sets of rear seats have split-fold options. Folding the seats down was not hard and getting them back into the upright position was quite easy too. Toni certainly had no problems getting them up or down.

There is also plenty of storage compartments spread around the vehicle and you’ll even find some surrounding the spare tyre where you can hide things that prying eyes won’t see.

Conclusion
Toni liked just about everything about the Hyundai Santa Fe Highlander. For her it was comfortable, economical and fun to drive. For me … well it’s amazing how much an aching back can change your view of a vehicle in just a week.

Toni would certainly buy one even though all our kids have grown up and left home but the Hyundai Santa Fe is not high on my list of vehicles I would like to own. If the driver’s seat had more room to move back I might change my mind but until that happens this Hyundai fanboy is sadly disappointed.