Skip to content
1 Comment on Holden Cruze – made in AustraliaPosted in Holden By news deskPosted on October 13, 2010September 14, 2018Tagged Holden Cruze 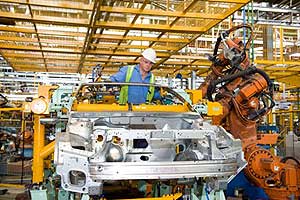 Up until now Holden has been importing the popular Holden Cruze models from Korea but today saw the official start of Holden’s Cruze assembly line at their plant in Adelaide. It’s a multi-million dollar investment and that’s a great sign for the Australian car industry.

Holden Chairman and Managing Director, Mike Devereux, said there was overwhelming interest in the progress of the Cruze localization program at the Elizabeth plant ahead of the launch next year.

“It’s great to welcome the Government and media into the new South Bodyshop for the first time. It’s the beginning of a new era for Holden, adding a new global small car to our local portfolio,” he said.

“With Cruze and Commodore we have the flexibility to meet the changing demands of the market and to offer our customers a family of great locally made small and large cars.” 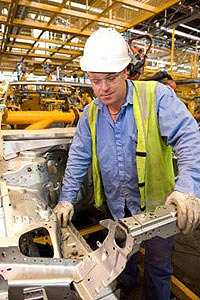 Mr Devereux was joined this morning by the Minister for Innovation, Industry, Science and Research, Senator the Hon Kim Carr, and Deputy Premier of South Australia, the Hon Kevin Foley, to officially open the South Bodyshop.

He commended the Holden employees who also designed and built the new facility and signed the first Cruze vehicle body produced by the team.

“The team at Elizabeth designed the production process themselves using the experience that many of them had from working on other great Holden programs like Monaro,” Mr Devereux said.

“This gave employees much greater input to the program and it’s fantastic to see it all come together.”

Within the South Bodyshop 22 new robots and 48 refurbished robots have been installed in the fully-functioning layered build line. This GM global manufacturing process provides a runway for Holden to adapt future advanced technologies on future vehicles.

Mr Devereux also thanked the Federal and South Australian Governments and the trade unions for their support during the challenges of the past 18 months.

The roof, body sides, closures, fascias and majority of interior plastics will be manufactured onsite. Cruze bodies will be produced in the South Bodyshop and then join Commodore on the line in General Assembly.

Holden Cruze – made in Australia