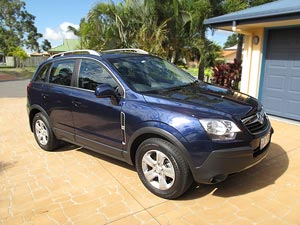 We picked up our test vehicle – the 2.4-litre petrol five-speed automatic all-wheel-drive Captiva 5 in Brisbane and headed for the office. Now that might sound as though it’s a rather boring way to test a new vehicle but the Aussie Motoring office is at least a four hour drive north of Brisbane … and we were taking the long way back.

Hey if you’ve got a new vehicle to play with then you may as well give it a good workout on the way back to the office … and that’s what we did.

Sadly our first impressions were not what you might call … ‘good’. Sure the Catpiva 5 cruised quite comfortably on the motorways that take you out of Brisbane towards Ipswich but it was a bit slow off the mark and the engine was a bit noisy too. 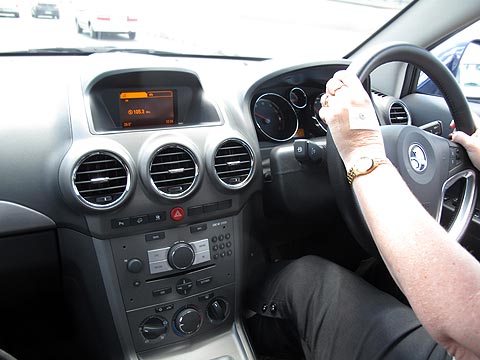 Ok so I thought that we had somehow picked up a diesel and it wasn’t until we stopped the other side of Ipswich for a pit stop and I opened the petrol cap that I discovered that we really did have the 2.4-litre petrol engine under the bonnet.

It was about that time too that I discovered just how uncomfortable the driver’s seat really was. On the first part of the trip I’d sat in the passenger seat and played with all the knobs and buttons and my partner had driven but after the pit stop it was my turn to drive.

Instead of sitting comfortably as I had been in the passenger seat I found that I seemed to be sitting on two bars that ran down either side of the seat squab and their sole purpose seemed to be to dig into my backside and remind me that I’m not built like a racing ferret anymore.

Well at least the Captiva 5 cruised well and it continued to do so out through Fernvale and up to Somerset Dam. It really impressed me with the handling and I could point it into tight curves at a good speed and feel confident that we’d come out on the other side still pointing in the right direction.

But then there aren’t many hills on the main roads between Brisbane and Somerset Dam … the hills start on the other side of the dam and that’s when we discovered that the Captiva 5 with the five-speed auto gearbox really doesn’t like steep hills.

The auto box in the Captiva is fitted with what Holden calls “Active Select” … it’s the usual set up that you find in automatics these days where you can change gears manually by slipping the gear selector across into a separate gate that then allows you to change up or down simply by nudging the gear selector forward or back.

I’ve driven a lot of cars with that sort of gear selector and I don’t remember actually ever using it on the open road … but it got quite a workout in the Captiva. If I wanted to maintain a decent level of momentum up the hills coming out of Somerset Dam I had to use the gear selector to change down into a lower gear on almost every hill otherwise we might have hit the bottom of the hill at a fair pace but we’d be down to less than 60kph by the time we hit the top.

Once we did get back to the office we decided that we really needed to let the local Holden dealer look at the vehicle … the engine noise, the sluggish starts and lack of power on the hills could have all been signs of something majorly wrong so off to the dealer the Captiva and I went.

After a quick test-drive, a listen to the engine as I helt it at 2000rpm and a look at the engine oil it seemed that everything was all good. The foreman politely suggested that with only 6.7k on the clock I should expect some noise as the engine loosened up and ran itself in.

The sluggishness from a standing start … well the Captiva has an electronic throttle and if we had come straight from a vehicle with a throttle cable then we would think the Captiva was sluggish. In fact we had come from such a vehicle and by the next day we weren’t finding the Captiva as sluggish as we thought.

It’s certainly no rocket but now that we know how to drive a vehicle that doesn’t have the instant response you get with a throttle cable it’s not so bad. And as for the lack of power … well it does weigh 1.83 tonnes and it only has a 2.4-litre motor so maybe we were expecting too much … after all it’s not a sports car. 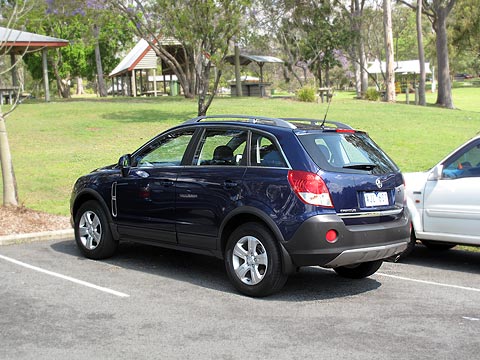 And that’s where we’ll leave you for now. We’ve got the Captiva 5 for a week and I have to admit that it is growing on us … and the driver’s seat is getting softer (or I’m getting thinner) … so maybe our full road test won’t be quite so negative about what really is a solid vehicle that we may just have taken some distance outside its comfort zone.