Skip to content
2 Comments on One Million Audis Sold in ChinaPosted in Audi By news deskPosted on October 25, 2010September 14, 2018 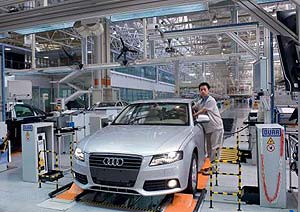 Audi started in China 22 years ago … the first premium car maker to venture into what has become such an important market place … and last week the hit an amazing landmark in a country that we so often think of as being rather poor. On October 20 a metallic blue Q5 was handed over to its proud owner and that vehicle marked one million sales for Audi in China.

Of the cars delivered to customers, 950,000 were produced at Audi’s plant in Changchun and the remaining 50,000 were imported. To date, no other carmaker in the premium segment has managed to sell over a million cars in the Chinese market.

This year also marks another record for Audi in China. In the first nine months of 2010, Audi delivered some 175,000 units in China and Hong Kong, also a new record.

“Over the entire year, we will deliver well over 200,000 cars to customers in China,” predicted Dr. Dietmar Voggenreiter, President of Audi China. “And we have already set our sights firmly on the next sales target: we intend to reach the second million within the next three years.”

One Million Audis Sold in China