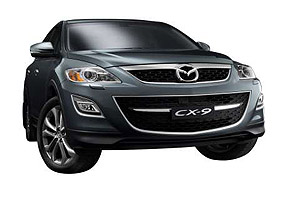 The Mazda CX-9 is a big vehicle … it weighs over 2 tonnes … it has a big presence on the road … and it has a big thirst for fuel.

But then with a price tag starting at around $54,455 (the current drive-away price here in Queensland) you may not be too worried about that thirst for fuel and you would probably have skimmed over the CX-9’s specifications … especially the part that said that the Mazda CX-9 had a combined fuel economy figure of 12.2L/100km … when you bought it.

But then when you started driving it around town you would have begun to notice just how thirsty that 3.7-litre V6 really is. Just how thirsty it really is a hard to determine until you actually drive it and discover that a combined fuel economy figure is just a little meaningless if you spend a lot of your time driving in the city where the true fuel consumption figure will be much higher.

So perhaps the fuel consumption of the Mazda CX-9 is not one of its strong points and it seems that Mazda agrees because the CX-9 has undergone something of a mid-life upgrade and Mazda wants you to know that it’s now more fuel efficient … a whole 0.9L/100km more efficient.

Mazda’s seven seat CX-9 continues to be powered by a 3.7 litre V6 petrol engine with 24-valves, DOHC and Sequential Valve Timing (S-VT) linked to a six-speed automatic tranmission. All that produces 204kW of power and 367Nm of torque that is delivered to the road via Mazda’s on-demand Active Torque Split (ATS) all-wheel drive system.

Mazda engineers have worked on the engine combustion control to improve efficiency during deceleration and those periods when the motor is idling. They’ve also worked on improving the differential gear control and reduced transmission friction as well.

The new CX-9 also comes with lighter 18 and 20 inch alloy wheels that reduce the overall weight of the vehicle compared to the previous model and tyre rolling resistance has also been reduced.

The Mazda CX-9 will continue to be available in the same three grades as the previous model and prices remain unchanged.