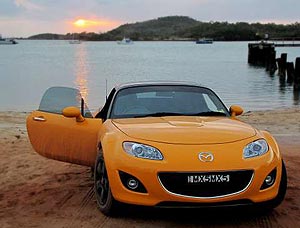 Who in their right mind would want to take a Mazda MX-5 … a two-seater roadster … up to Cape York and back?

Heck I wouldn’t even take our old Honda CR-V up there. If it’s not suited for those sort of roads then Mazda’s best selling roadster sure isn’t … but nobody seems to have mentioned that to Mazda … and Mazda weren’t silly enough to send a send an MX-5 that had come straight off the showroom floor … I guess their interpretation of “slight modifications” differs to what most people would consider to be “slight”

Mazda was looking to recreate an epic drive experience in the spirit of the 1996 trip that successfully took two Mazda 929s to Cape York and back. And while several eyebrows were raised at the thought of the larger 929s taking on the challenge back then, there were to be even more looks of surprise as the pure-bred sports car traversed the dusty and often unsealed roads on the way to the Cape.

Essentially a showroom-spec Mazda MX-5 Roadster Coupe, the Sunset Yellow car that successfully made the trip had only slight modifications to prepare it for the grueling road conditions. The standard 17 inch alloy wheels were replaced with the wheels from a Mazda Tribute and the tyres were changed to 195/65R16 Michelin Agilis.

Coil-over shock absorbers were adopted to shield the occupants from the inevitable vibrations that would come from the countless road corrugations while a metal bash plate and stone deflectors were fitted to protect underbody components from damage.

In a victory for determination and Mazda reliability, the MX-5 had to defeat some extremely challenging road conditions, a number of river crossings and frequently changeable weather on both legs of the trip before eventually arriving back in Cairns unscathed.

Mazda Motorsport’s Allan Horsley who was in charge of preparing the MX-5 for the challenge said “This was a groundbreaking road trip and one that Mazda was delighted to play a part in. Given the exceedingly challenging road conditions we’d be faced with many people might have thought we were mad to even plan such a trip.

“But having worked closely with MX-5s for many years now, I knew what great sports cars they are and how well built they are. To successfully complete this challenge really just adds another chapter to the MX-5 legend.”