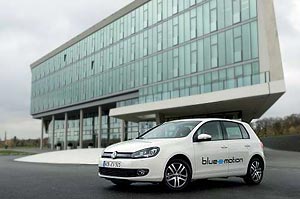 VW obviously isn’t satisfied with wringing 3.8L/100km out of their BlueMotion Golf – a vehicle we should see here in Australia in 2011 – because now they’ve announced the VW Golf blue-e-motion … the electric version of the VW Golf that will hit the market in 2014.

A five-door, five-seat concept is already on the road in Germany and undergoing extensive testing. The test car is fitted with an electric motor that delivers maximum power of 85kW and a continuous power output of 50kW with maximum torque of 270Nm for a top speed of 135km/h

The VW Golf blue-e-motion is fitted with a lithium-ion battery that currently gives the Golf a range of around 150km but VW expects this range will be significantly increased by the time the blue-e-motion version of the Golf goes into production.

While most of us think of an electric car’s lithium-ion battery as being one complete unit that’s not the case in VW’s Golf electric. In the concept car the battery consists of 30 modules containing a total of 180 lithium-ion cells and the modules are distributed throughout the vehicle in places where the vehicle’s design leaves empty spaces. These places include under the rear bench seat, in the centre tunnel or under the floor of the boot … but not in the space set aside for luggage. 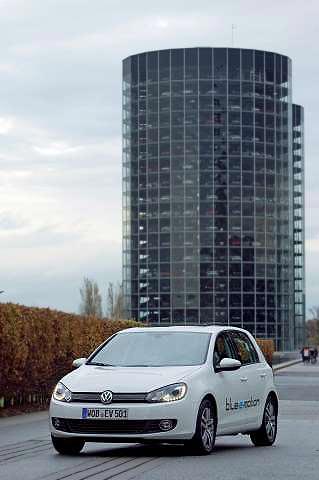 The dashboard
Displays on the dashboard allow the driver to see how much energy is being demanded by the “electric pedal” at any given moment on the kW gauge (replaces the classic tachometre); drivers strive to keep the kW reading as low as possible practically intuitively. A range indicator is also integrated in this round instrument. The speedometer, located on the right side as usual, integrates another small gauge that provides information on the battery charge state.

Battery regeneration
A new feature is the display of regeneration intensity in the multifunction display between the kW instrument and the speedometer. In battery regeneration, the driver has the option of pre-setting the braking energy recovery strategy over four stages (D to D3) via the automatic gearshift lever or gearshift paddles on the steering wheel.

In the lowest stage (D), the car “sails” as soon as the driver’s foot leaves the “electric pedal” – now the Golf blue-e-motion moves with very low drag; it is only “slowed” by the rolling resistance of the tyres and air resistance. In the D3 stage, or B for braking, on the other hand, the maximum amount of kinetic energy is recovered and fed to the battery. In addition, the electrical energy consumption of the automatic climate control unit and its blower can be called up in the multifunction display.

Three driving profiles control comfort, dynamics and range
In addition, an active driving profile can be set; this lets the driver select priorities in advance: between maximum range, maximum comfort and maximum dynamics. The selected profile then pre-configures the power of the electric motor, air conditioning control, maximum speed and battery regeneration strategy.

When the driver activates the Normal mode, power is reduced to 65 kW and top speed is lowered to 115 km/h. In the Range+ mode the engine controller limits power to 50 kW and the vehicle is limited to a maximum speed of 105 km/h. At the same time, the air conditioning system is completely deactivated. The selected profile is shown in the multifunction display.

Charging
The Golf blue-e-motion is charged via a plug connector behind the folding VW logo on the radiator grille. A pictogram of a plug connector in the multifunction display indicates that the charging cable is correctly inserted and locked. During active charging an LED also flashes in the charge state indicator, and the charge level shown in the indicator is continually updated.