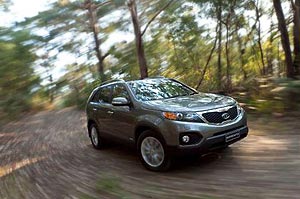 Kia has just announced some tech upgrades for the 2011 Kia Sorento and while they claim that there is a long list of enhancements to the Sorento range the number listed in their press release is a little underwhelming.

At the top of the list is Bluetooth connectivity for your mobile phone and media streaming for the entire range from the base model Si right through to the Platinum. Controls for this feature will be mounted on the steering wheel.

All vehicles in the Sorento range will also have what Kia describes as a headlamp escort function where the headlights will illuminate the ground in front of the car at night after it has been turned off. Kia believes that will provide enough light for people to get from the car to the house with safety.

The two top models in the Sorento range will receive upgraded displays for the rear-view camera. As in the previous model these displays are in the rear-view mirror … just where there’s plenty of light and plenty of reflection to make seeing the displays quite difficult.

The SLi and Platinum models also get a new leather wrap for the instrument cluster and the front passenger window is now automatic when you press the button to open or close the window. There’s also a built-in safety feature … but the Kia press release doesn’t actually say what that safety feature is.

The Platinum’s sunroof also gets some attention with the inclusion of an alarm that is activated when the sunroof is open, the ignition has been switched off and the driver’s door has been opened.

And that’s all there is … a total of seven upgrades … not a long list by any stretch of the imagination.

Thanks to the strong Australian dollar prices on the 2WD petrol and diesel models remain the same but Kia will charge you an extra $200 for the SLi and Platinum models.