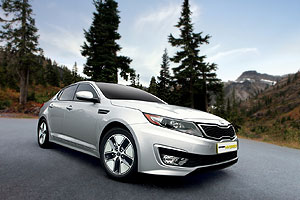 Move over Toyota. Kia wants to offer a little competition for you in the hybrid market and they’re going to do it with the Kia Optima Hybrid.

The Kia Optima Hybrid was introduced to the world today at the Los Angeles Auto Show. Unfortunately there’s no immediate plans to offer the Optima Hybrid here in Australia … the standard Optima won’t reach Australia till January 2011 … but Kia is definitely looking to take on the opposition in the United States and with a combined fuel consumption of just 6.2L/100km it’s sure to do just that.

The Optima Hybrid is fitted with a parallel hybrid system that combines and electric motor with a 2.4-litre petrol motor – similar to what you see in the Hybrid Camry. Both motors drive the front wheels via a six-speet automatic transmission without the traditional torque converter. 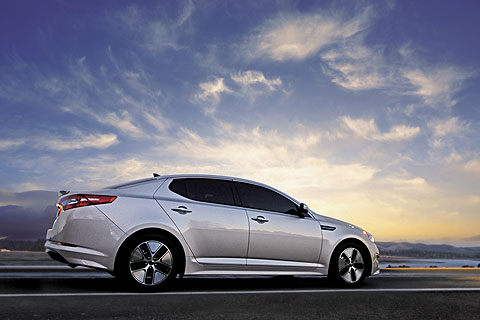 To further enhance fuel efficiency and reduce emissions the petrol motor cuts out if the vehicle is stationery for more than a few seconds. 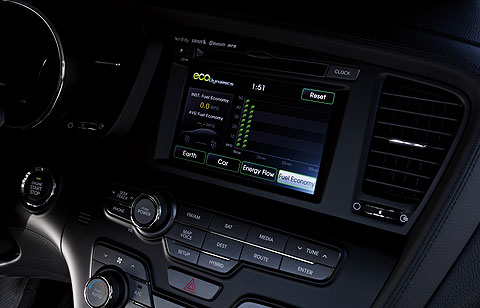 The battery
The battery that’s such an important part of every hybrid vehicle was developed by Kia in partnership with LG. It’s a lithium polymer battery that weighs 20-to-30% less than a nickel-metal hydride battery and occupies 40% less .

The lithium polymer battery developed by Kia and LG holds its charge for 25% longer than nickel metal hydride batteries and Kia believes that it is so reliable that the Optima’s battery pack will not require replacing during the vehicle’s lifespan – at least 10 years and 250,000 kiometres.

Control System
Once again, as with the Hybrid Camry, Kia have mounted the battery in the boot.

The complete hybrid system is controlled by the Optima’s Hybrid Control Unit (HCU) which acts as the car’s mastermind and integrates the smooth operation of the engine’s ECU, transmission’s TCU, battery management system (BMS), low voltage converter (LDC). This brain also gives the Optima a ‘Fail-Safe’ back-up capability and a ‘Limp-home’ mode. 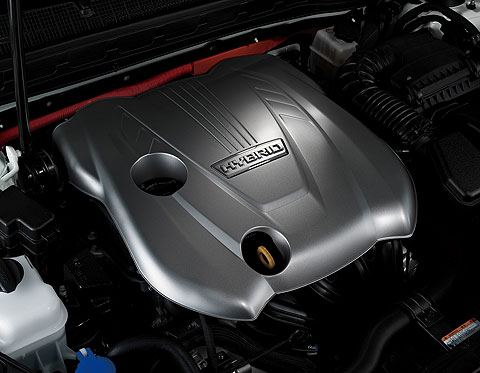 The engine
Just as Toyota did with the Hybrid Camry Kia has modified the 2.4-litre Theta II engine to operate on an Atkinson cycle. This raises the compression ratio by 20% and reduces fuel consumption by around 10 percent. On an Atkinson cycle the motor does lose some of its torque but the added power provided by the electric motor more than makes up for that torque reduction.

The Kia Optima Hybrid uses two independent cooling systems. The first is the normal cooling system that we’re all accustomed to with the radiator/coolant for the petrol engine. The second is a low-temperature system for the starter-generator and the power electronics.

For city driving Kia says that you should expect a fuel consumption of 6.5L/100km and 5.8L/100km on the highway.

To increase energy and fuel savings the Optima Hybrid has been lowered by 5mm, underfloor panels have been smoothed to reduce drag and low rolling resistance tyres have been fitted to low-drag wheels. Kia has also fitted what it describes as an ‘active air flap’ to the front grill to reduce drag too. 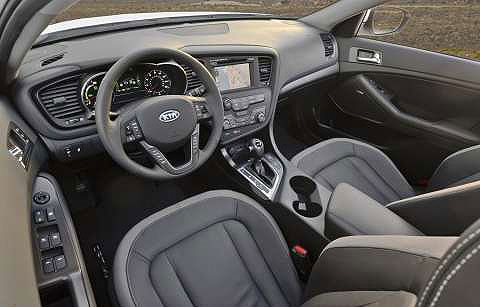 Interior
The Optima Hybrid version released in the United States incorporates all the same technical features and equipment levels offered in the non-hybrid version. About the only difference worth noting is what Kia describes as an ECO Guide to help drives obtain the most economical fuel consumption.

There’s no doubt that the Kia Optima Hybrid sounds like an interesting vehicle but the further I got into writing this report the more it began to sound like a Hybrid Camry. I’m sure there are differences so it will be interesting to get up close and personal to one when … and if … they arrive in Australia.

As I said at the start of the article, at the moment there’s no guarantee that Kia will bring the Optima Hybrid to Australia but we should keep our fingers crossed.