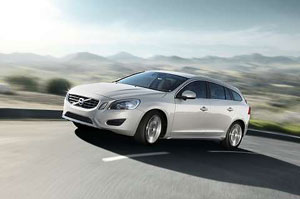 We’ll see Volvo’s new hybrid technology in the form of a Volvo V60 that will have its first showing at the 2011 Geneva Motor Show on March 1.

Unlike most hybrids that use a computer controlled combination of conventional engine and electric engine to power the car the Volvo V60 Plug-in Hybrid will allow the driver to control the form of propulsion that he wants to use.

A range of 50km for the electric engine may not sound like much but it’s likely that many drivers will choose that option and save the diesel for longer journeys.

The engines
The front wheels of the V60 Plug-in Hybrid will be driven by a five-cylinder 2.4-litre D5 turbodiesel, which produces 215 horsepower and maximum torque of 440 Nm. The rear axle features ERAD (Electric Rear Axle Drive) in the form of an electric motor producing 70 horsepower, which receives its power from a 12 kWh lithium-ion battery pack.

Volvo will release more details on March 1 but Volvo does say that this vehicle is ready to go into production and with the price of fuel on the rise again it’s hard to imagine that we won’t see the V60 Plug-in Hybrid in production.