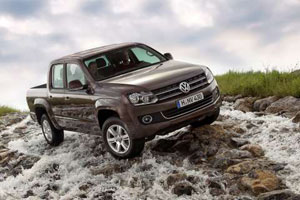 The VW Amarok has been on the horizon for some time now and it has finally arrived in Australia.

The Amarok represents VWs challenge to Toyota, Nissan and Mitsubishi in the recreational 4WD ute segment and it will be certainly interesting to see if VW can gain even a toehold in this very competitive market.

The range
The VW Amarok (Inuit for ‘wolf’) is built in Argentina and comes in five variants – a 2WD and four 4WD versions. All are dual-cab and powered by a 2.0-litre diesel engine coupled to a six-speed manual gearbox … VW says that a single-cab version will be available later.

The base-model is the 2WD … it has no fancy name … it’s just known as the Amarok and VW sees commercial buyers and tradies who are looking for a rugged workhorse as the market for this version.

The outside of this version has been designed to cope with the rough use that such a vehicle might encounter although it does come with heated rear-view mirrors and remote locking.

The interior is also designed to cope with some rough use and you won’t find carpets in this version. What you will get are plastic floor coverings that are tough and easy to clean. But there is a limit to the just how basic you can make the interior of a vehicle before it becomes too basic so the base-model Amarok also delivers some creature comforts with height-adjustable front seats, an ergonomically designed workspace and a variable-fold rear bench seat.

Trendline
After the base-model 2WD Amarok we move into the 4WD versions and the first is the Amarok Trendline. According to VW the market for the Trendline will be tradies who want a rugged workhorse during the week and something that will take them off-road or up the beach on the weekend.

So on the Trendline you get “sculpted” 16 inch alloy wheels, a front spoiler, colour-matched exterior mirrors and door handles and front fog lights. On the inside of the Trendline you get what VW describes as “high performance Climatic airconditioning” with electronic temperature control, an RCD 310 CD-radio system and a multi-function display on the instrument panel.

Highline
If you want the carrying capacity of a ute but with all the creature comforts of a sedan then the VW Amarok Highline is the Amarok version hat VW have built just for you.

On the outside the Highline features distinctive wheel arch flares and co-ordinated 18 inch aluminium wheels. You also get chrome accents on the front bumper as well as a chrome-plated rear bumper and rear-view mirrors and tinted privacy glass in the rear doors.

On the inside the Highline delivers all the appointments found in the Trendline plus chrome trim, leather appointments, automatic climate control and a much better sound system.

Ultimate
At the top of the 4WD list is the Amarok Ultimate and it comes with what VW describe as “significant visual and comfort features above and beyond the Highline equipment line”.
Those features include leather seats as standard, 19 inch Alstaro alloy wheels, prominent side steps and stainless steel sports bars as well as badging that clearly tells others that you’re driving the top-of-the-range. 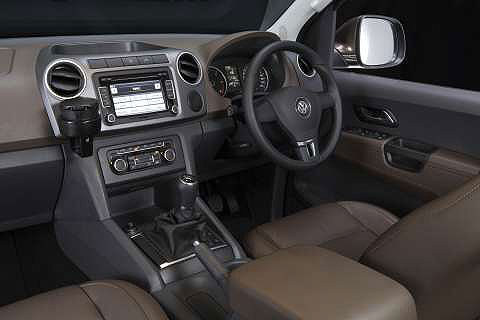 The Amarok Ultimate is available with either selectable four-wheel drive or permanent all-wheel drive.

The engine
With the Amarok VW introduces a new TDI400 common rail diesel engine and this is the engine that will be standard across the Amarok range. It comes coupled to a six-speed gearbox.

This engine is a 120kW four cylinder diesel that comes with dual-stage control bi-turbo charging. It’s an engine with plenty of grunt and it develops 400 Newton-metres of torque at 1,500 pm. 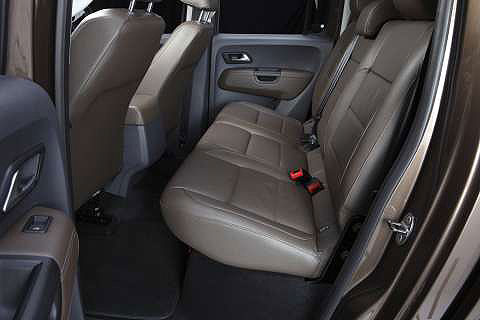 The drive train
There are three drive trains offered with the Amarok and all three driveline versions also have an Electronic Rear Differential Lock (EDL) which operates by automatic braking interventions that prevent wheel spinning on one side of the vehicle. Thanks to EDL, drive forces are always applied to the wheel with the best traction. 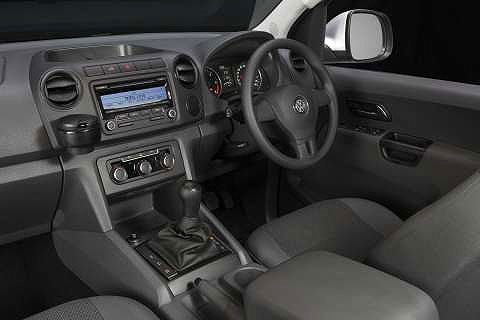 VW have called their 4WD drive trains 4Motion and the basic version of 4Motion delivers permanent all-wheel drive. 4Motion is combined with a central Torsen differential that ensures optimal engine power distribution between front and rear axles under all duty conditions.

Normally, the distribution ratio is 40:60; however, under rugged conditions, power distribution can be varied according to the properties of the road surface. VW also offers what they call “a selectable four-wheel drive”. Additional off-road gear reduction of the ute’s 4-wheel drive low setting and the standard 6-speed gearbox also enables extreme crawler drives.

This is beneficial when taking on complicated passages and climbing extreme inclines with up to 100 percent grades (45 degree incline angle), which the Amarok can even
master with a full payload.

Off road
The VW Amarok has an approach angle of 28 degrees (front), exit angle of 23.6 degrees and a ramp breakover angle of 23 degrees. The Amarok can also handle water half a metre deep. 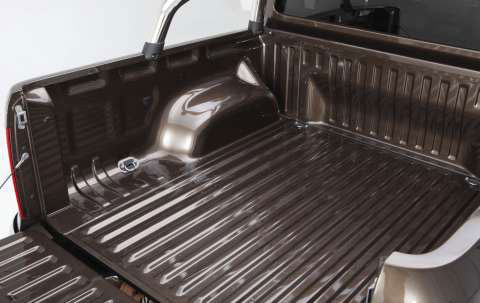 Safety
VW claims that the Amarok is the first dual-cab ute to receive a 5 star ANCAP rating although this rating only appears to apply to the 4WD models. Some of the standard safety features include drivers and front passenger airbag along with front, side and thorax airbags, electraonic Stability Programme with Brake Assist and off road ABS/ASR and EDL

Prices
The VW Amarok is not cheap and right now you can pick up some great deals on new 4WDs from VWs competitors for drive-away prices that are not much more than the cost of a 2WD Amarok before on-road costs are added.