Smart forspeed (oh how my word processor hates the way some car makers spell their names) has no emissions, no roof, no windows and no windscreen … at least nothing that would pass as a windscreen.

And while it may have none of those creature comforts … hey who needs a roof in the wet season in north Queensland anyway? … it sure does look as though it’s big on fun so it’s sad that the smart forspeed is only a concept car.

Of course if it has no emissions then it’s going to be an electric vehicle but unlike most electric vehicles it doesn’t have the neck-snapping acceleration that most electric cars have. 0 to 60 … km/h that is … is hardly anything to get excited about. But I’d love to be able to slip into that cockpit and push it up to its top speed of 120km/h.

Technical details
For those interested in the technicalities the smart forspeed has the usual lithium-ion battery that delivers power to a rear-mounted 30kW magneto-electric motor. As I said a moment ago, the forspeed’s acceleration isn’t going to produce too much adrenaline … after all, this is meant to be a city car … but it does have a button on the centre console that willl activate a boost function that provides a short 5kW boost if you really want to get away from the lights.

A full charge in the battery gives the smart forspeed a range of 135km and when that’s exhausted it only takes 45 minutes to get an 80 per cent charge into the battery. If you thought you heard a note of sarcasm … or disappointment … in what I said just then you’re right.

A range of 135km on a single charge is great but 45 minutes to recharge the battery to just 80 per cent capacity? Really … if we want to see the electric car take the place of cars powered by fossil fuel then someone really needs to get something happening with recharge times. 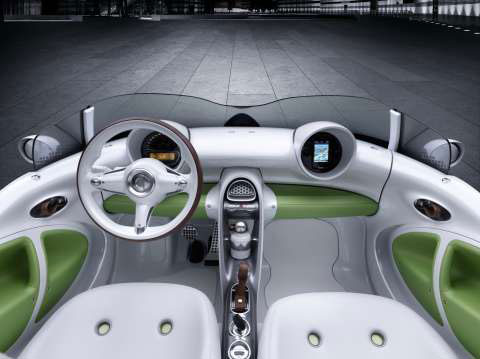 Interior
The open two-seater has been deliberately designed without an outer door handle – an interior grip is all that is needed to open the door. The control for the electric parking brake is particularly convenient to operate and also has a simple and functional design: the switch on the centre tunnel is reminiscent of the lever used to pull in the landing gear of aircraft.

There is a block with ten LEDs in the middle of the instrument panel. When the forspeed is started the LEDs shine through the translucent paint and show the battery charge status of the electric smart. When switched off noting is seen of the charge indicator except its outline.

The aircraft design idea has also been carried over to the dashboard. The driver and co-pilot sit in front of two separate round turbine-like instrument clusters.

Whilst the driver has the speedometer firmly in his field of vision, the passenger is responsible for communication and navigation: this area of the cockpit features a smartphone. It can be swivelled by up to 90 degrees in its holder and towards the driver so that the driver can also take a look at the display of the navigation system.

As in the production models from smart, the smart drive app for the iPhone® has all the important features needed whilst driving: phone calls via hands-free system, navigation with a special smart touch and a Car Finder that guides the driver back to the parked car. 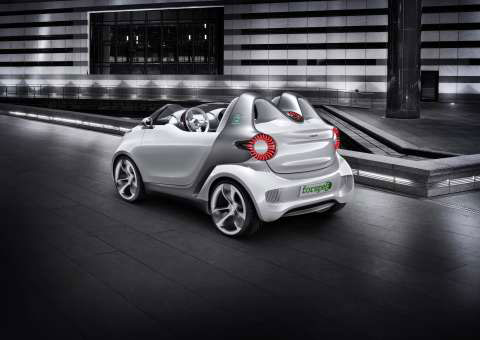 When it rains
Well if you’re in the car you’re going to get wet but smart have made it easy for all that water to drain away and not be left sloshing around in the floor of the forspeed or left on the seats. After all, there’s nothing worse that driving with a wet bum now is there?

Sadly I can’t see any government allowing a car like the smart forspeed to be registered for road use but wouldn’t it be fun if it could be?