Skip to content
1 Comment on New Models from Hyundai This YearPosted in Hyundai By Stuart LiveseyPosted on March 21, 2011September 13, 2018Tagged Hyundai 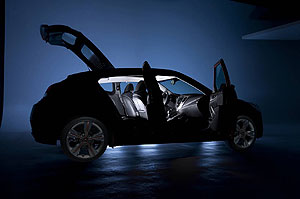 Just when you thought that we’d all the news we were going to have about new vehicles hitting our showrooms this year Hyundai decided that it was time to announce not one new model but four and they’ll all arrive over the next nine months.

Let’s start with the last new model first because it’s something quite new and rather stunning. It’s the Hyundai Veloster and we took a brief look at it a few weeks ago … you’ll find the details here.

The Veloster is rather unique because it’s a conventional coupe design but with a third door for passengers. The version that’s coming to Australia towards the end of the year will have a 1.6-litre direct-injection four-cylinder motor with your choise of a six-speed manual box or a six-speed dual-clutch auto.

Just before the Veloster arrives Hyundai will be releasing the all-new Elantra. Now the Elantra has been around for quite a few years but this one is completely new and we’re promised that it will come with a heap of goodies.

Hyundai are keen to get a grip on the light-car market and to help them do that they’re bringing out a new version of the Hyundai Accent. The company is promising sleek looks, advanced technology, lots of safety features and you can expect to see it on the showroom floors sometime in the next three months.

The i40 wagon only made it’s debut at the Geneva motor show at the beginning of March but it will be here later in the year. The i40 was designed by Hyundai’s German design team and is somewhat unique … Hyundai are released the wagon version before they think of building the sedan.

We previewed the i40 back at the beginning of the month and you can read more about it here.

So Hyundai dealerships are going to be in for some busy times as these new vehicle start arriving … there’s some very interesting machinery arriving from Hyundai over the next few months and it will be interesting to see how much of a challenge they’ll be for Hyundai’s competitors when they look at their sales figures at the end of each month.

New Models from Hyundai This Year