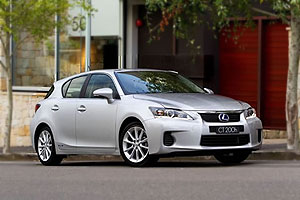 You probably saw it on the weekend running around the track at the Australian Grand Prix in the hands of a bunch of celebrities who were doing their best not to bend the cars and not to make a fool of themselves.

The CT 200h has a selectable dashboard that displays either a hybrid ECO meter or a tacho and back lighting that instantly identifies whether you’re running in SPORTS or ECO mode. The instrument panel also features bio-PET degradable plastics.

Models
The Lexus CT 200h is offered in four equipment levels starting with the Prestige, moving up to the Luxury, the F Sport and peaking at the Sports Luxury. There are also a number of what Lexus call “Prestige Enhancement Packs” for people who want the base model with extras.

And if you want the comfort of the top of the range Sports Luxury but want to bring out the beast in it … and you …  you can add some of the hardware available in the F Sport version including side skirts and a large rear spoiler. 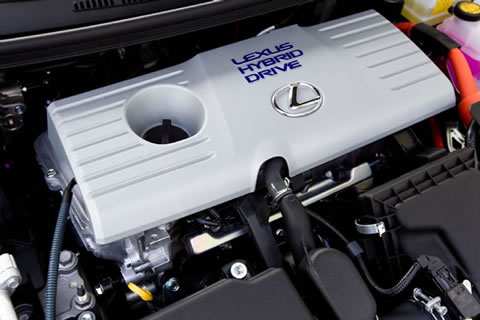 The CT 200h is designed to travel at speeds up to 45km/h on electric power and whenever the vehicle is moving in reverse the second electric motor is supplying the power.

As with other Toyota/Lexus hybrids the petrol engine is designed around what’s known as an Atkinson Cycle and Lexus has combined that with an electronic throttle, direct ignition, twin-camshafts, a multi-valve cylinder head and variable valve timing to improve efficiency.

This is one vehicle that provides better fuel economy around town than it does on the open road. Fuel consumption for urban driving is 4.0L/100km while out on the open road that goes up to 4.1L/100km.

Top speed? Well that’s really not all that relevant considering the speed limits on Australia roads but you may have noticed during the celebrity races that the top speed for these cars isn’t all that fast.

Driving Modes
As mentioned earlier the Lexus CT 200h comes with four driving modes … each with it’s own unique set of characteristics. The control to select a driving mode is located on the centre console and it consists of a button for EV mode and a rotary dial for ECO, NORMAL and SPORT.

I guess that’s a nice touch and adds to the excitement but in reality there’s no way you can over-rev a vehicle fitted with a continuously variable transmission.

SPORT mode in the Lexus CT 200h does do a lot more than just changing the dash to show a tacho … in SPORT mode the throttle is more responsive, the level of assistance from the power steering is reduced so that the steering is more direct and the calibration of the Vehicle Stability Control and Traction Control is less intrusive.

In SPORT mode the Lexus CT 200h also takes a little more care of the car and its occupants by using the Vehicle Stability Control to reduce understeer.

On the inside
Lexus set out to make the interior more like a cockpit than a cabin when they designed the CT 200h. The driving position is low and drivers are faced with a steering wheel that draws heavily on design elements found in the Lexus LFA. Instrument dials are designed to be highly visible and all controls are grouped within easy reach.

The hybrid battery that is so often found in the boot of other hybrid models is under the floor in the CT 200h so there’s more room in the boot and the rear seats have the usual 60/40 split to allow part or all of them to be folded flat.

While the base model misses out the other three all have satellite navigation as standard. While the display seems to stick up out of the dash like a sore thumb it can be adjusted to suite driver height and it will adjust automatically to variations in ambient lighting. 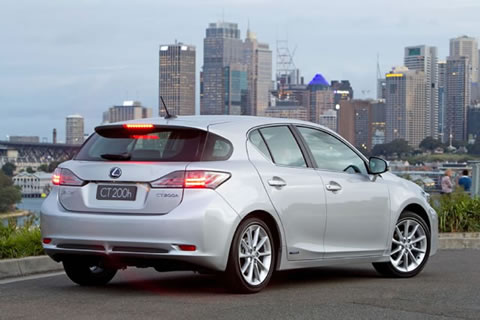 Safety
Active Cruise Control and Pre-Collision safety System are standard on the Sports Luxury while an electronically controlled brake system with ABS, electronic force distribution and Brake Assist is standard on all models.

Vehicle Stability Control, Traction Control and Hill-start Assist (it operates in forward or reverse) are also standard on all models. A rear view camera is an option on the base model and standard on the other three models although the option on the base model is a display in the rear-view mirror (perhaps not the best place to have it) while for the other three the display appears in the navigation screen.

All models in the CT 200h range come with eight airbags as standard. The extra two are driver and front-passenger knee airbags. Whiplash-injury lessening front seats are standard on all models too.

Lexus have designed the body with multiple energy-absorbing paths to limit cabin deformation if an accident occurs. The CT 200h’s body is designed to provide extra protection in the case of a side impact by channeling the force of the impact to the sides and down into the floor. High-tensile strength steel has been used to provide extra protection.

Price
Let’s not forget that Lexus is a premium brand so you should expect to pay more but the strong Australian dollar does ease the pain more than just a little. You can get into the base model for just $39,990 plus government dealer charges and that’s a good price point for a premium car.