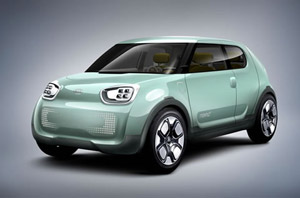 Over the years we’ve seen the concept of concept cars change considerably. There was a time when concept cars were truly weird and wonderful designs that really pushed the limits of everyone’s imagination.

Then we seemed to slip into a period where concept cars were more about being test beds for technology that was about to be released in upcoming models and it seems that’s what we can expect in concept cars coming out of Europe right now.

In Japan and Korea we’re in some sort of middle ground where a new concept car can go either way. Some … such as some of Nissan’s latest fantasies are still pushing the limits of imagination while others are obviously just one or two steps away from production.

And then there are some that fall somewhere in the middle and that’s where the Kia Naimo electric concept car seems to sit.

The Kia Naimo has just been released at the Seoul Motor Show and while we’re obviously seeing a car that could easily be turned into a production model we’re also seeing a car that looks at some aspects of automotive design in a different way.

The overall design is clean and simple … even the name is taken from the Korean word “Ne-mo” that means ‘square shape’ … but that simple outer-envelope hides some complex technology and some modern interior design that’s questioning the future of the current trends in what we usually see inside a car. 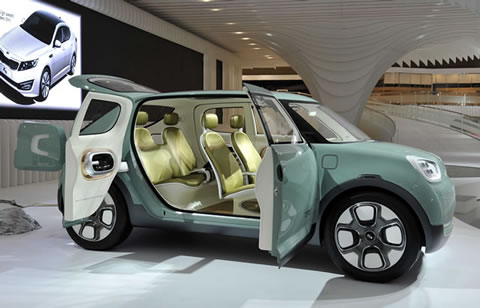 For example there’s nothing terribly challenging about the outside of the vehicle … it really is a simple box on wheels but look at what’s inside the cabin and you will see a very different interior to what we’re accustomed to.

Sure, you would expect the interior of a concept to push the limits of design and imagination but the Kia Naimo manages to do that with a design that could easily be translated into a production car and that’s what makes this car so appealing.

Technical details
The Kia Naimo is the third electric concept car released by Kia in the last 12 months. It’s a five-door, four-seater powered bya Permanent Magnet Synchronous Motor … an electric motor with a maximum output of 80kW and a maximum torque of 280Nm. It has a top speed of 150km/h.

The Naimo is 3,890mm long and 1,589mm wide and basically has a wheel in each corner to allow the most head, leg and shoulder room possible … as well as at least some room for luggage.

To maximize that passenger and luggage room the designers have placed the twin-pack 27kWh battery under the floor at the rear of the car. The battery uses Lithium Ion Polymer technology to give the Naimo a driving range of 200km on a single charge.

The interior
Inside the car can best be described as clean, functional and definitely not what we’re accustomed to see inside a car. Check out the interior photos in the gallery and see for yourself.