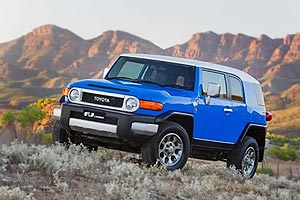 The Toyota FJ Cruiser is on the showroom floors as you read this and there’s no chance that you will ever confuse it with anything else. The FJ Cruiser definitely has unique looks and it comes in a range of bright colours that only make it stand out even more.

Toyota Australia’s senior executive director of sales and marketing describes the FJ Cruiser as a steel-and-glass statement of Toyota’s commitment to great design and … well … it is a statement … but whether buyers think that it has a great design is something that only time will tell.

Unfortunately time may not be all that kind to the FJ Cruiser … not because of its design but because world events that Toyota has no control over may reduce its market appeal.

The Toyota FJ Cruiser is not something completely new either. It made its first appearance at the 2005 Chicago Auto Show and it went into production soon after. Toyota describe that production model as being “affordable” and having “a low price”. 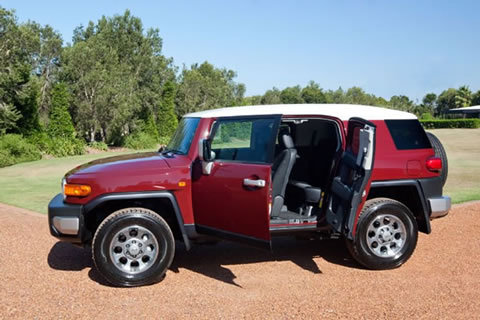 What the Toyota FJ Cruiser isn’t
Despite its unusual lines and it’s bright colours (there are more subdued colours in the range) and the marketing hype that seems to have concentrated on the younger market the Toyota FJ Cruiser is not a toy. It is a very serious four-wheel drive that will take you places that some SUVs that want to pretend that they’re off-road vehicles will never be able to access.

The minimum ground clearance for the Toyota FJ Cruiser is 224mm and the overhangs are just 865mm at the front and 1115mm at the rear and with genuine 4WD this vehicle will take you just about anywhere you want to go. 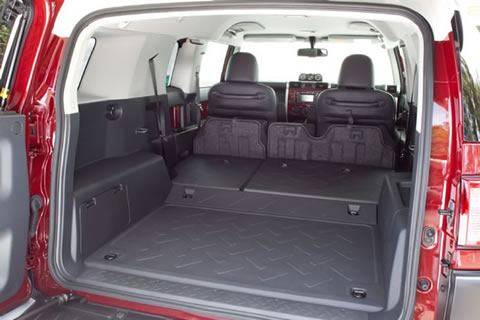 The general appearance is of a two-door vehicle but there are a second, smaller set of doors on each side that give increased access to the rear seats. The back door has a glass hatch that can be opened without actually opening the whole door.

The rear door also incorporates the spare wheel and it’s hinged on the passenger side so getting your shopping into the luggage area could be awkward but then there reasons why hinging a door on the driver’s side is just as awkward.

The bumpers are perhaps a weak link in an otherwise apparently sturdy vehicle. They’re made of light-weight resin and fog lamps are integrated into the front bumper while turn signals are built into the rear bumper.

The interior
If you thought that the dashboards of the latest crop of 4WDs were becoming girly and not what a real man would want then you’re going to love the dashboard on the FJ Cruiser. Toyota suggests that the FJ Cruiser’s dashboard radiates “a strong, precise mechanical appearance” and they’re right … it does.

The layout of the gauges is simple and the main controls are clearly visible and simple to use and some are located on the steering wheel. There are some technical aids for the off-road driver too including an inclinometer and a compass.

The inclusion of a compass may sound rather dated if you never take your vehicle off-road but I’ve been in situations where a compass was very handy … in fact it was more use than the map I had with me.

This is a vehicle that you’re not going to be afraid to get dirty. There’s no carpet to ruin with muddy boots in the Toyota FJ Cruiser … just rubber flooring that you can turn the hose on. Even the seats are covered with a urethane film to protect the fabric and the stitching has been treated with water repellant to ensure nothing leaks into the fabric when you use the hose to wash out the accumulated mud and associated crud.

The FJ Crujiser will seat five adults and there’s just under a cubic metre of cargo space available when the rear seats are in the upright position.

While this vehicle is definitely built for going off-road it’s not entirely what a Neanderthal might want to drive. There’s a six CD audio unit with a 4.3-inch LCD display and speakers built into the roof lining. You can hook up your iPod or other MP3 players and there’s Bluetooth connectivity as well.

The suspension
While the FJ Cruiser was built for the American market the version that you will see on the roads here in Australia has suspension that has been specifically developed for our condisitons.

The shock absorber calibration has been stiffened by around 10 per cent for our roads and trails, tyre specifications were upgraded and the wheel diameter was increased from 16-inch to 17-inch and modifications have been made to reduce noise and vibration.

Overall the ride and handling in the FJ Cruiser has been brought up to be inline with the Landcruiser Prado and some of the modifications will be applied to the FJ Cruiser regardless of which country it will be sold in. 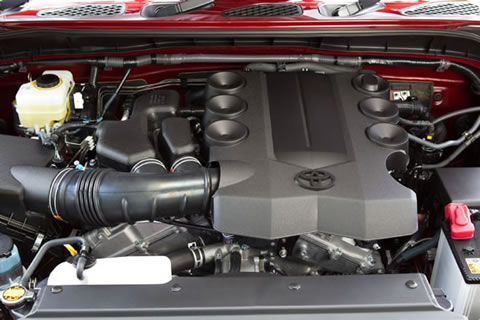 The engine
This is where word events may cause Toyota Australia some grief because the rising cost of petrol will make quite a few people think before they buy an FJ Cruiser.

The Toyota FJ Cruiser is powered by a 4.0-litre quad-cam V6 petrol engine that produces 200kW of power at 5,600rpm and 310Nm of torque from 1200rpm. The engine comes with dual variable valve timing with intelligence, camshaft timing that varies depending on revs, throttle position, crankshaft angle, coolant temperature and air flow through the intake.

Power is transferred to the wheels via a five-speed electronically-controlled automatic transmission and compared to some bigger diesels in the Toyota range the FJ Cruiser is a thirsty beast that runs on a rich diet.

Toyota recommends that the minimum fuel used in the FJ Cruiser is 95 RON fuel but they say it will run on 91 Octane unleaded fuel and they claim a combined fuel cycle of 11.4L/100km. Imagine what it will do to your wallet if most of your running is around town and you have to fill the 72-litre tank at $2.00 a litre.

Safety
Active safety features in the FJ Cruiser include Vehicle Stability Control, ABS with EBD and Brake Assist. There’s also Active Traction Control … a feature that mimics a limited slip diff but uses the brakes to do so.

A reversing camera and parking sensor are also included and the front windscreen has quite an unusual windscreen wiper setup … there are three wipers to cover the large expanse of glass.

The bottom line
Remember what Toyota said about this when it was launched in the United States? It would be “affordable” and “have a low price”.

Well if you live in Sydney and want the Toyota FJ Cruiser in Hornet Yellow and you’re going to register it for private use then today you can drive it away for $49,343.96 and if you live in Queensland it’s about $6.00 less.

Regardless of where you live the RRP that excludes dealer and government charges is $44,990.

It looks like a great vehicle and I’m sure that the Toyota FJ Cruiser will interest a lot of people but the rising price of petrol may dampen a lot of people’s interest.