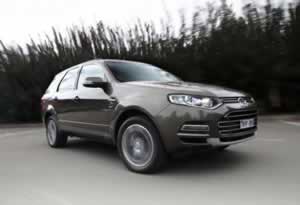 The new Ford SZ Territory that we took a peak at here has now been released and there’s no doubt that this is definitely going to take the Territory to a whole new level and with some impressive fuel consumption figures for the diesel version the new Ford Territory could be the right vehicle at the right time for many people.

The petrol engine is not available in any of the all-wheel drive models.

The body
While the new Ford Territory still looks like a Territory there are some obvious differences in the new model. 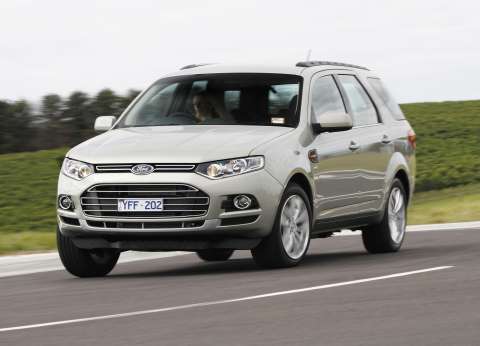 The interior
At first glance at the interior you might think that little has changed inside the new Ford SZ Territory but the instrument panel has re-designed, the centre console has been changed and there’s a new four-spoke steering wheel. 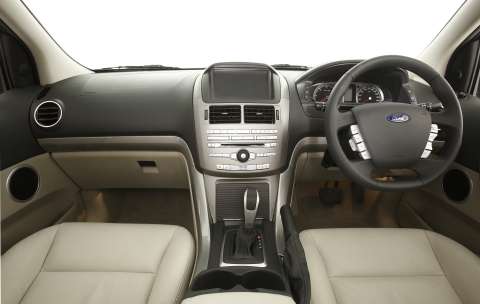 I guess in the old days it was called “the dashboard”.

So what do you see in the HMI? Well there’s the instrument cluster, a multi-function display, a steering wheel loaded with more controls than you would expect could be fitted on a steering wheel, full iPod and Bluetooth intergration, USB connectivity and a reversing camera on the TS and Titanium variants.

In the base model TX Territory you get a monochrome 5.8-inch LCD screen and a colour 8-inch LCD screen on the mid and top of the range models. Where a reversing camera is fitted the display on the LCD screen changes to the camera display when reverse is selected.

Satellite navigation is fitted standard to the Titanium variant and this is also displayed in the LCD screen. This satnav system features what Ford describes as “green routing” and this calculates the most economical route to your destination. It will also show you the fastest and shortest routes. There’s a choice of 2D and 3D map modes … street numbers are displayed … advanced lane guidance is included and there’s also a traffic message channel that will give you information on traffic congestion.

This system was first released in Australia by Ford in the 2008 FG Falcon.

Engines
The new Ford SZ Territory is the first to come with a high-tech 2.7-litre V6 turbo-diesel and this is offered along with Ford’s upgraded 4.0-litre I6 in-line six-cylinder petrol engine..

The new diesel engine that features common-rail injection was developed at Ford’s Diesel Technology Centre in Dagenham in the United Kingdom. It’s already seen use in a number of European based SUV’s but this is the first time that it has appeared in a Ford-badged vehicle.

The combined cycle fuel economy figures for the petrol powered SZ Territory is 10.6L/100km and 8.0L/100km for country driving. Urban driving figures are still rather scary at 15.0L/100km.

Safety
The new Ford Territory SZ retains all the safety features that led to the previous model being awarded a five-star ANCAP safety rating and has even more safety features.

A new Generation 9 Dynamic Stability Control System … incorporating Roll Over Mitigation … developed by Bosch is fitted to the SZ. The Roll Over Mitigation system constantly monitors the vehicle’s behaviour and induces additional understeer when it detects an increased likelihood of rollover during extreme handling manoeuvres.

When the Roll Over Mitigation system detects the likelihood of a roll over it brakes individual wheels and reduces the driving torque to prevent the rollover and at the same time reduces engine speed to ensure greater stability.

This ICC includes integrated controls for a single-CD audio system which supports both iPods7 and Bluetooth® 5-operated mobile telephones and audio devices. An in-built USB port also allows music files to be played from a USB device. A 3.5-millimetre audio jack is also fitted.

TS standard equipment
In addition to what comes as standard in the TX the mid-range Territory TS gains machined-face 18-inch alloy wheels; reverse camera; front fog lamps; a unique TS front bumper; and a front grille painted in satin silver. The TS is fitted with a premium Interior Command Centre which features a premium seven-speaker audio system with a 150-Watt amplifier and subwoofer along an eight-inch colour touch screen. This new touch screen allows both front-seat occupants to control a variety of audio, communication and vehicle settings by simply touching the appropriate on-screen symbol. 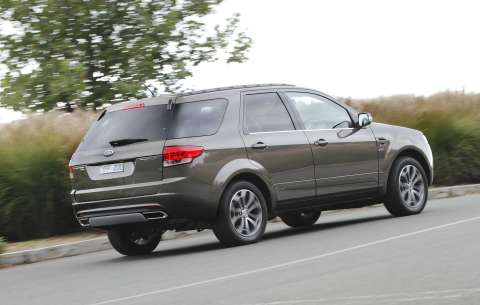