Remember the first Mercedes-Benz A Class that appeared? It looked a little funny and was a little short in the boot. It was reputed to do strange things when going up ramps in car parks too.

The body
This concept of what a future Mercedes-Benz A-Class might look like has some sleek flowing lines and a very low silhouette. There’s also some very interesting design features around the front of the car that will probably never appear in a production version.

The radiator grille consists of metallic silver spots on black stems. The headlamps are full LEDs but the daytime running lights are made from 90 optical fibres in aluminium sleeves. 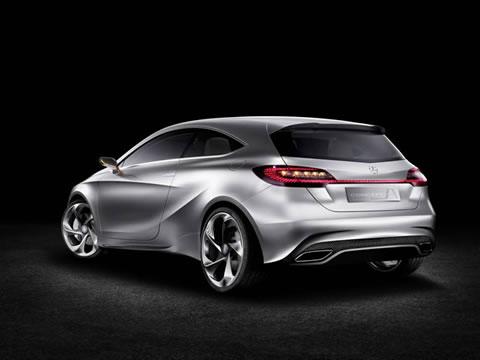 The engine
The Mercedes-Benz Concept A-Class is powered by a new turbo-charged 2.0-litre fuel-injected four-cylinder petrol engine taken from the new M270 range of engines. It develops 155kW of power but still keeps emissions and fuel consumption down thanks to direct injection and that turbo-charger and the power is transferred to the road via a dual clutch transmission.

Just to keep you safe this little fire-breather comes with a radar-based collision warning system and Brake Assist and Collision Prevention Assist that gives a distracted driver plenty of warning if you’re getting too close to the car in front. 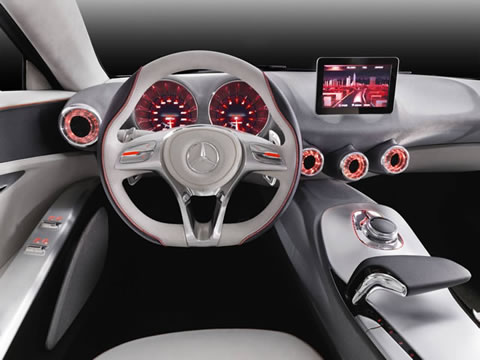 The interior
The Mercedes-Benz Concept A-Class features a dashboard that is said to have the shape of an aircraft wing (well use your imagination and you might see an aircraft wing there) and it comes with stretchable textile lining and Mercedes-Benz says that this “enables the bionic, cellular structure of the component to remain visible”.

The displays in the instrument cluster are red and Mercedes-Benz says that this is because the red colour is reminiscent of a jet’s afterburners. Even the central control unit continues the same theme and the gear lever is said to take its form from the reverse thrust control found on a flight deck. 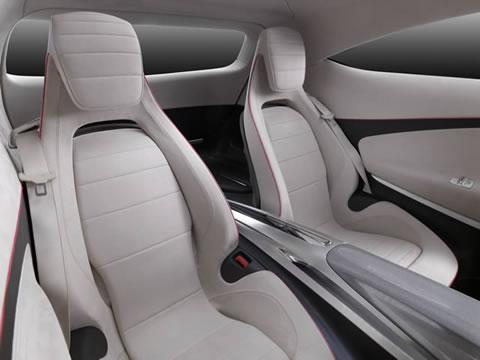 Maybe you can see an aircraft theme in there … maybe you can’t … but there’s no doubt that this is one very eye-catching car that any one of us would love to drive.