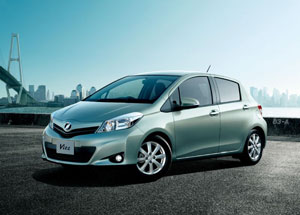 The first thing that you’ll notice about the new Toyota Yaris is that it has gone through a complete redesign and there’s obviously a substantial increase in cabin space. The wheelbase has been extended by 50mm, the length has been extended by 100mm while the height has been reduced by 15mm.

Another noticeable feature of the new Toyota Yaris is the single windscreen wiper. This wiper has an integrated washer nozzle for better cleaning. If you haven’t driven a car with this type of wiper/washer integration before then you’ll have to take my word for it … it does seem to clean a lot better than the system that we have lived with for so many years.

Last year Toyota sold 21,452 Yaris models and the new design is sure to attract even more sales.