Skip to content
3 Comments on Have You Seen This Car?Posted in Holden By Stuart LiveseyPosted on June 8, 2011September 13, 2018Tagged Holden Malibu 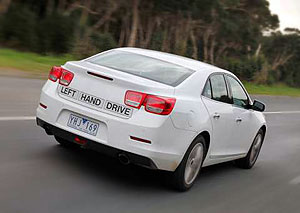 If you have then you’ve seen the Holden Malibu … well to be more precise you’ve seen the first Chevrolet Malibu to hit the roads in Australia … but we’ll call it a Holden because it’s not carrying any Chevrolet badging and next year it will be a Holden.

This Holden Malibu is here for testing and and calibrating by Holden’s Powertrain Engineering team not just for Australia but for General Motor’s markets outside of the US. General Motors plan on selling the Malibu in almost 100 countries around the world and to have it here for testing and calibration before it’s released into those markets shows how important the engineering team at Holden really are.

This vehicle is being tested at Holden’s Lang Lang Proving Ground and out on public roads around Australia so you could catch a glimpse of it but we will have to wait till late next year to see the Australian version of the Malibu on the showroom floor.

Have You Seen This Car?

3 thoughts on “Have You Seen This Car?”