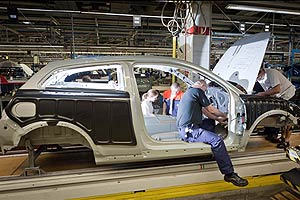 But in typical Volvo fashion they’re doing things a little differently … they’re building the basic vehicle on the general C30 production line at Ghent and even fitting a dummy engine so the vehicle will run through the production line without any hiccups.

Once the body has reached the point in the assembly process where the internal wiring has been installed the dummy engine is removed and the body is then transferred to Volvo’s Special Vehicle plant at Goteborg for the fitting of the electric motor, the batteries and the electronics that go into an electric vehicle.

Apart from the obvious lack of a conventional engine the Volvo C30 Electric differs from the conventional C30 in a number of ways. The fuel tank has been replaced with a compartment for the lithium-ion batteries and the central tunnel has been enlarged to hold more batteries.

The Volvo C30 Electric will have an operating range of just 150km on a full charge. Top speed is 130km/h and the C30 Electric can reach 50km/h from a standing start in just four seconds. Recharging will take around seven hours.

The Volvo C30 Electric will be made available to leasing customers throughout Europe at the beginning of Autumn in the northern hemisphere but Volvo obviously aren’t expecting the C30 Electric to be a big seller. They suggest that they will have built “about 250 cars” by the end of 2012 and “possibly more if market interest takes off.”

That strange forecast is a direct quote from the C30 Electric’s press release.