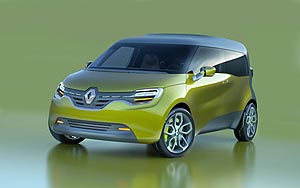 I don’t think that I’ve ever seen a car maker bring out a genuine concept for a commercial vehicle before. Sure there’s at least one Ford concept commercial vehicle floating around in Europe at the moment but that’s an electric vehicle built into a standard body.

The Renault Frendzy on the other hand is a genuine concept vehicle and it pushes some boundaries with typical Renault flair.

The idea behind the Renault Frendzy was to produce a commercial business vehicle that can also double as a comfortable passenger car and at the same time be environmentally friendly and connected to the world.

The result, according to Renault, is a vehicle that’s a combination of modern work tool and warm and friendly family car.

Exterior
You will notice that the Renault Frendzy comes with just about every door you can think of. There are the usual doors for the front-seat passengers … a sliding door on the curb side for loading straight from the footpath. A rear opening door on the driver’s side for passengers and you’re typical tailgate at the rear. 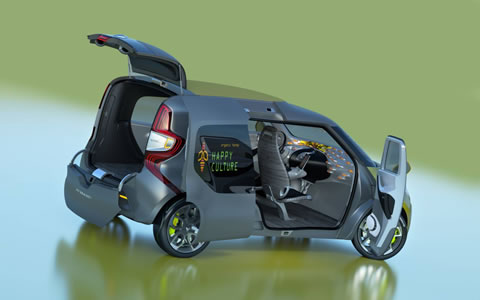 What you may not notice is that the window on the sliding door incorporates a window display … after all every business wants to advertise what they do and what better place to do that but on the window. That display can be quickly changed while the vehicle is on the move.

There’s also no central pillar to get in the way when you’re trying to load it up with goods or passengers.

Renault understand that drivers of commercial vehicles often operate in quite different conditions to what drivers of family vehicles might experience so when the Frendzy is being operated in work mode the rear-view mirrors sit upright but when the driver switches to family mode the mirrors rotate to the horizontal position. 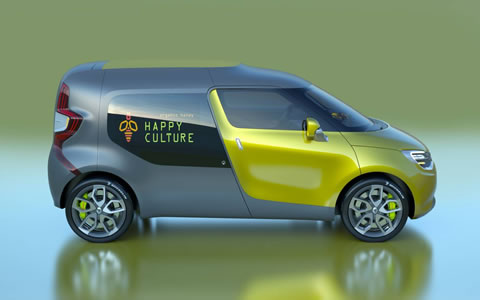 Inside the vehicle it becomes obvious that the Frendzy has a fabric roof that can adapt itself to the shape of bulky items that may be loaded in the rear of the vehicle.

The rear bench seat is integrated into the floor and stows out of the way when the vehicle is in work mode. The front passenger seat can also fold forward to give even more space in work mode.

The Frendzy comes with a BlackBerry PlayBook plugged into the centre console and apart from allowing drivers to stay connected to the Net it also controls the display that appears on the side cargo door. 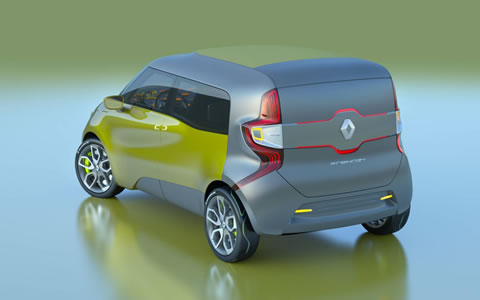 The engine
The Renault Frendzy is powered by a 44kW electric motor that produces up to 226Nm of torque. Power to the wheels is via a direct drive transmission and that combination can push the Frendzy to a top speed of 130km/h.

Renault gives no indication of the distance the Frendzy can travel before the lithium-ion batteries need a fresh charge.

While there is undoubtedly a few things that have been included in the Renault Frendzy that will never see the light of day in a production vehicle there’s a lot that we can expect to see in the humble delivery van in the next few years.